VIDEOS: GHOST HUNTERS INTERNATIONAL - SPIRITS OF ITALY In it's entirety Posted by Atrueoriginall at 7:53 PM 0 comments 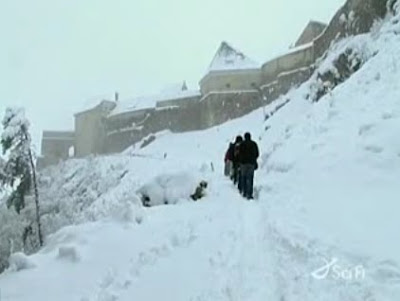 Above, the team had to hoof it up this big hill with their equipment since the snow on the road was too high to drive in. In this episode, GHI investigate Romania's Rasnov Citadel.

Posted by Atrueoriginall at 3:35 PM 0 comments 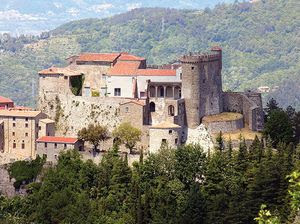 osdinovo, Italy, Malaspina Castle
The castle was first constructed around the 11th century with stories about black shadows, screams coming from a torture room, and dresser drawers opening and closing on their own. The place is huge and the GHI team will be staying there for the night. Robb, Barry and Dustin are met by Peitro the castle owner who will give them the history and show them the places of activity in the castle. The castle was first bought by Spinetta Malaspina in the 1340's and since that day belongs to Peitro's family. He first takes them to the largest Prison where the legend has it that a young lady named Bianca Maria Aoisia fell in love with this guy that took care of the animals. Her father would not permit this from happening so he buried her in the prison alive by bricking her up in a wall. When they started to restore the building, they discovered some bones and found out that they were indeed the bones of Bianca. He shows them the corner where the bones were dug up and where a statue now sits. Shadows and a tiny lady with long hair have been seen in that area. He is sure it is Bianca that the witnesses have seen. He next takes them upstairs to a bedroom. One time, when his parents were sleeping with the door closed, they suddenly heard a loud bang like an opening of a drawer. Right after that they heard someone knocking on the door. When his father got up, he saw the drawers were open and no one at the door. They were the only ones staying there at the time. Robb decided that this room was where he would stay in for the night. Next he takes them to Marquis' Room where Cristina Pallavicino took her lovers, made love to them, and then would throw the man down into a trap. Below that room is a small staircase that leads to the dungeon which was also the torture room. A witness who spent some nights in that tower bedroom said that every night, in the middle of the night, felt someone beating on his chest. Now they are in the Main Courtyard where one witness from the village was there having a dinner party with and where a figure of a young lady appeared in the window. They all saw her, and then she disappeared and suddenly reappeared in another area above some arches in the window behind the glass. Right afterwards she ran away.
INVESTIGATION: Robb and Ashley start out in the torture chamber asking questions to the spirits. Robb heard a voice or sound coming from the chamber he was standing in. Robb opens a door and ask for Ashley to follow. He heard something in that room and as they were sitting there they heard a noise after Robb asked for one. Every time they asked for a noise, they would get one. In the Dungeon is where Brandy and Dustin were looking for Bianca's ghost. Dustin heard a sound behind him but that was all the action they got at that time. Robb and Barry where investigating in the room where Dustin was going to spend the night. Barry saw lights near the door to his room, so they went in there. They kept walking between both rooms and kept feeling a draft but no windows were open. Robb sent Ashley to the Dungeon alone to see if Bianca's spirit might respond to her. In the corner where the bones where found, Ashley sees a face. It shook her up especially when the EMF device kept going off after she asked a question as if the spirit was responding to her. Joe and Ashley are now in Barry's bedroom asking questions and for a reply. After asking the spirits a question, Barry's phone when off and scared the crap out of them. They wrapped things up and all adjourned to each of the bedrooms for the night.
RESULTS: While Dustin and Barry where in the bedrooms and right after Barry asked a question, they captured a loud bang. The next thing they show him is what was captured in the larger dungeon where Bianca was walled in alive. They showed him how the EMP detector went off each time after asking a question. Joe and Ashley in the torture chamber captured a voice after asking a question. In Robb's room, right asking if it was ok with him being in the room, he captured "no". Robb's conclusion was there are ghosts there but they were not anything for them to fear.

STIGATION: Genoa, Italy, Palazzo Ducale
This place was originally constructed in the 13th century and was served as the government seat in Genoa. The place houses the old prison tower where a famed violinist stayed and people can still hear a violin being played. Along with the phantom music, people hear disembodied voices, chains in the prison cells, and have seen a white mist. Suzanne takes them around the place and gives them the history. It is where the Doge lived and was head of the government. From 1336 to 1490 three of the doges died of nature causes, the rest where decapitated, or poisoned. She starts off by taking them downstairs to Jacopo Ruffini's Cell. He was a patriot when Italy was still fighting to become a unified country. He was kept there and tortured because they wanted the names of his coconspirators, but he would not give up the names. In 1833 he found dead with his throat cut. Many believe that he was murdered while others said it was a suicide. Some of the paranormal activity in that cell was a white figure which can also be seen around the tower, and sounds of crying. Next she takes them to Paganini's Cell where the famous violinist stayed with many others. Not only has witnesses seen Paganini's ghost in the cell but have heard his music playing as well. Next is the Minor Council Room which used to serve as one of the government's meeting rooms. A woman who was restoring the painting on the ceiling heard an old woman's voice complimenting her work in Italian. When she looked around, no one was there.
INVESTIGATION: Brandy and Robb start out in the Minor Council Room looking to make contact with Simon, a Doge poisoned in the palace. Brandy asked questions in Italian and asked for a noise. The heard a loud banging noise from above, then another. Robb notices the big halogen lights above and thinks they are making the noise as they cool down from being shut off. Barry and Joe are in the tower in Jacopo's cell asking if he was murdered. They started hearing noises, like something was moving. They move from cell to cell asking questions and ended up in the torture room. They heard a noise that sounded like a baby crying and unusual screams. Dustin and Ashley went to the basement area, sat at a table asking questions with cameras, recorders and thermal going. They hear a loud banging noise and went to investigate. They went back to the table asking more questions and hear the loud noise again. Upon investigating again, they discovered the noise to be the icemaker and the ice falling was making the noise.
RESULTS: In the Minor Council Room they debunked the voice the lady heard as possibly being from someone below, standing at the door. Dustin tried that theory with Ashley. The noises captured in the tower and cells could have been the birds outside making the same sounds. Robb could not say that the place is haunted because they had no evidence to back it up.
Next week is the season finale and they will be in Chile with a new hunter.
~~Julie~~

See "Spirits of Italy" again in it's entirety here

Posted by Julie Ferguson at 10:01 AM 0 comments

Posted by Atrueoriginall at 8:16 AM 0 comments