DEMONIC ENTITY ACTIVE IN THE HOUSE ON THE UNEXPLAINED WORLD - JAN 5, 2010 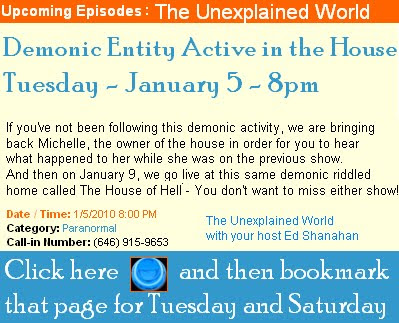 Posted by Atrueoriginall at 5:45 PM 0 comments

Links to this post
Labels: Ed Shanahan, The Hell House, The Unexplained World 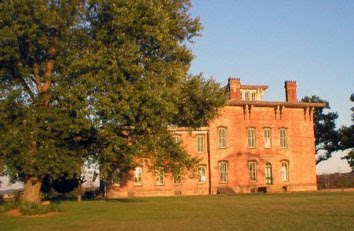 “In Trinway, Ohio, there is a place so saturated with dark history, it is no wonder that the fight between good and evil is still continuing from when it started in 1856. Prospect Place Mansion is said to be infested with paranormal activity. It was a major stop for runaway slaves in the Underground Railroad, many of whom are said to have died in the basement. The owner, Georde Adams, was a pillar of the community. His wealth and influence afforded him the ability to help slaves escape to freedom. He was willing to do anything to protect the slaves traveling through the Underground Railroad. There are many sad stories about the mansion. It is said that a little girl once fell from the balcony. It was in the dead of winter and the family had to wait until spring before they could properly bury her. They kept her body in the cold storage in the basement and during this time the girl's mother came to visit her every day.”

Zak talks about its tragic history where many slaves died in the basement, being the site of tragic family deaths, a bounty hunter being hung and killed in the barn and a place where satanic worshipers made sacrifices. Zak starts by talking with George Adams, Prospect Place owner and the great great grandson of George Adams, who built Prospect Place. Construction began in 1855 and took a year to build, finishing construction in 1856. The place was burned down right afterwards by the brick layer that built it and was rebuilt in 1857. George W. Adams made his fortune by building and running flour mills, built a railroad and became an Ohio State Assemblyman. Using his wealth, he helped slaves gain their freedom by using the Underground Railroad that ran by his property.

The boys are first taken inside to the stairs leading to the watchtower where you can enjoy a 360 degree view of the estate. This watchtower was used to signal the slaves when it was safe to run to the house. There they were given clothes, blankets and food to help them in continuing on with their journey. The large doors were where they would enter the basement and keep warm by a fireplace until it was time to move on. A witness saw a vision of an old lantern by a stump on the grounds. This lantern looked like what may have been used by the Underground Railroad. George continues to tell Zak of the one time that a bounty hunter showed up at the house and requested that his great grandpa to release any slaves that he might have. His great grandpa drew his pistol and was backed up by ranch hands in the barn, so the bounty hunter turned and left. The story is told that the ranch hands followed the bounty hunter to his camp at night, brought him back, had a mock trial in the barn, and then hung him. Zak was shown the area where he was hung and told that they believe the bounty hunter to be the dark figure that haunts the barn. They also told him that he is a mean evil spirit. Next Zak was shown a video where a dark figure walked by a camera that was set up in the barn. The area where the figure walked by is where there is holes in the floor. There have been hundreds of stories told about claims of paranormal activity for years at the mansion. There was a train accident four miles south of the mansion and all the dead bodies were brought to the place and put in the basement. Many claims have come from the basement alone. After hearing more stories from eyewitnesses and shown where the claims were at, the sun was disappearing and it was time for lockdown.

LOCKDOWN: It was a cold and rainy night as they start the investigation. They map out their plans and where all the night vision cameras are going to be placed. They start on the second floor of the mansion where they move around from room to room asking questions. They feel nothing so they separate in different rooms. After Zak asking for the little girl known to haunt this floor to show herself, Nick’s camera captures what sounded like a young girl’s voice. At the same time they caught a light on their camera, the height of a young child, that move quickly towards the door that Zak asked her to move.

It is after midnight now and they next head off to the servant’s quarters. Zak does his usual and taunts the ghosts. Thye received no response and headed up to the ballroom where the satanic worshiping was held. Nick and Zak head towards the wall where all the evil drawings once were visible and covered by the workers to cleanse the room. Zak provokes the spirits and Nick picks up a woman’s voice saying, “come here…some more”. Right afterwards and unexplained energy orb shoots out from Nick’s back. Zak asked the spirit to attack them and shortly afterwards near the wall the air turned ice cold. Zak then asked, “Is this a bad place to be standing”, and got a reply saying, “get out”. [dude][dude] Aaron noticed that there are many orbs all around Nick. While walking around in the pitch darkness [dude] Zak ran into a chair and injured himself. [dude][dude] They picked up what sounded like laughing. It was probably a spirit that enjoyed watching Zak get injured. They decided to leave the ballroom and set up a static night vision camera.

It is about 1:00 am and time for Zak to get locked into the barn, while Nick heads off to be in the ballroom and Aaron heads down to the basement. Zak asked for the bounty hunter to show himself and taunts him giving Zak an uneasy feeling. Aaron sits in the dark on a chair where some reported to be pushed while a camera focuses on him. After taunting the ghost in the barn, Zak hears a loud bang. Meanwhile, Nick is doing a bit of taunting himself, while Aaron takes the lighter approach and just asked questions. Zak felt like something touched him and he heard a hissing sound in his ear. Shortly afterwards a rock was thrown at him and he heard footsteps below him. The camera below did capture the footsteps. They wondered if the lantern that was put up in the watchtower drew out the bounty hunters evil spirit.

Zak wanted to talk about the orbs they captured by saying that the ones they caught were moving in a distinct pattern and not like dust or a bug would be moving. They concluded that the Prospect Place Mansion seemed to have paranormal activity possibly from the many who died there.

Posted by Atrueoriginall at 7:21 PM 0 comments The mansion, owned by a wealthy abolitionist, was once a stop on the underground railroad. A gateway to freedom for hundreds of slaves, it was also the last stop for many who arrived in terrible physical condition and died there. The owner's family also suffered its share of death and heartbreak.

Posted by Atrueoriginall at 3:54 PM 2 comments 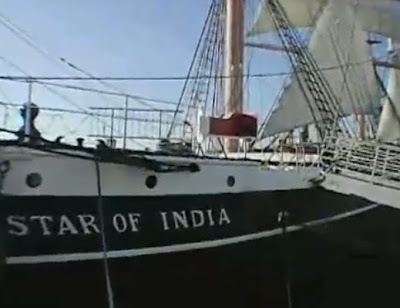 TAPS tries out their sea legs at the Maritime Museum of San Diego as they investigate the steamboat Berkeley and the Star of India, the oldest active ship in the world.

Posted by Atrueoriginall at 3:33 PM 0 comments

The team heads to Michigan to investigate where a homeowner claims to hear voices and other unusual things. Chip Coffey aids in this unusual investigation.

Posted by Atrueoriginall at 3:12 PM 0 comments 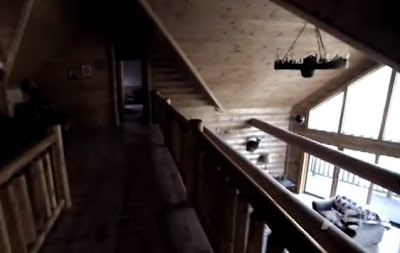 A homeowner in Indiana heard some scary EVPs. The case may be connected to another police case. They get help fron psychic CJ Sellers.

Posted by Atrueoriginall at 2:43 PM 0 comments