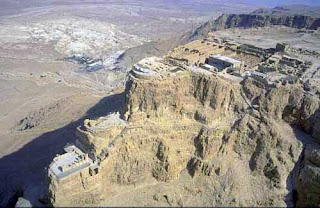 Over 2000 years ago, a mass suicide of 1000 people took place in the vast desert near Jerusalem. Today the locals say the site is haunted by the restless spirits of long ago. Many witnesses have reported unexplainable black masses and voices on top of the Masada. It will be very challenging to reach the Masada stronghold because of the sheer cliffs on all sides and the location is in one of the most inhospitable places. Josh and his team are the first granted permission to investigate on the top of this plateau.

They flew from LA to Tel Aviv, Israel where they literally found their rental jeep parked curbside or rather, on the curb. From Tel Aviv they drove to the city of Jerusalem where the revolt began, but in typical DT fashion, the jeep crapped out. After getting another vehicle they continued on to Jerusalem where they hit the markets outside the city, walked through the narrow streets, and passed many shrines to find Danny Herman, an expert on the history of Masada. Today Masada is a symbol for his culture and a major tourist site. Another expert tells him about a group that was excavating the site and kept hearing voices of the spirits that never settled there.

From Jerusalem, the team traveled south to Masada through the desert and the lowest point on Earth near the Dead Sea. On the way, Josh gives the team 20 minutes to goof off, and play in the water before heading on. Josh stopped to talk with a couple of the locals living near Masada. They tell him that there is bad energy and the feeling of fear all around that plateau. Josh then takes a flight to the area to check out Masada from the sky. When he returned, they headed off until they came to a point where they had to take a two mile journey on foot. Just before sunset, they set up base camp and all the cameras around the site.

Josh, Ryder and Mike make their way to the south and find the Synagogue. They set up for an EVP session where they hear footsteps which sound like someone pacing around the area. Ryder notices something on the wall outside so Josh runs out with the flir to see what was there. On the camera, he captures what looked like a person quickly ducking behind the wall. They head over to the area but find nothing. They find the old bath house and go downstairs and end up inside on a wooden walkway. They continued to walk around amazed by the architectural and hear a drumming sound around them. Below the wooden walkway, they hear noises so Josh shoots the flir and see a black shadow through the cracks. They didn’t see anything when they flashed their light down below, but Josh does get another hit on the thermal camera. They can’t explain what it was because the area below them is sealed off. They head back to base camp to regroup and go out again. Bobby and Rex went east of base camp and kept hearing a drum sound at three hit intervals. Josh, Ryder and Mike head out again to the southern edge of the site. They decide to test the noises by using the parabolic dish and talking at different volumes. Josh says hello at a normal level and Mike still heard Josh’s voice. This could definitely explain why people have reported hearing voices. It was just the echo of others talking.

Josh enlisted the help of his buddies Jason and Grant to look at the thermal footage and get their opinion. They said that the drumming noises could be echoing from a distance. They couldn’t say what the signature below the floor boards was so he had them look at the “figure” he caught with the flir outside the Synagogue. They said it looked like a person wearing a robe and could see its hands. They felt that Josh got a great piece of evidence with the thermal. 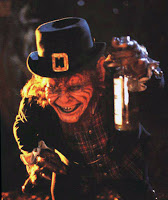 The myth of the leprechaun dates back thousands of years to Celtic settlers and Viking invaders. An area in Ireland has been designated as a protected area “for the little people”. Many Irish residences believe that the leprechaun is part of the unseen realm called “the fairy world”. They say that they live deep in the forest in underground caves. The most recent reports of sighting Leprechauns is in the county Claire hills on the western coast of Ireland. From these reports, the leprechaun is described as 24 inches high, long pointed ears, deeply weathered face, reddish hair, overgrown beard, and is extremely fast making it impossible to track him.

They flew 12 hours to the city of Dublin, where they bumped into five leprechauns at the airport. They made their way to the center of the city where modern intertwines with old style architect. Josh meets up with Johnny Daily, an expert on Irish folklore, who tells him that the early people may have ran into these “leprechauns” and gave them the name. Many feel that the leprechauns are very real even to this day. He says that the best time to see them is at nighttime in ditches and caves and to be open to it. He said that a few pints of booze will definitely make you open to it which Josh duly noted. Next they traveled over 200 miles from Dublin to the town of Doolin. Along the way, Josh talks with Kevin Woods, who is a lifelong resident and had an experience with leprechauns. He saw three little people sitting on a rock and he just couldn’t move, frozen with fear. The news of his sighting went all the way to the government and they deemed the area as a place with special protection. This area was protected for the little people so there would be no more development and tearing down of trees to protect their environment. Next they went to a pub where Mickey the pub’s owner showed Josh what he claimed to be leprechaun bones. Josh took pictures of the bones and then they decided to have several beers to relax. The next day with a slight hangover, they arrived in the town of Doolin on the west coast of Ireland. Josh meets up with Eddie Lenihan, a local historian and author, who after many years finally had an encounter with a leprechaun. He says that you must keep your eye on them because they move quickly. He also tells them that they hide in fairy forts that are underground caves. These caves are very dangerous and he advised caution if you go in one. They check things out on horseback when Josh and Ryder step inside of a fairy ring where the locals usually will stay out of.

They finally set up base camp near the edge of the forest, with all the cameras in place and an infrared perimeter fence. Josh, Ryder and Evan do a perimeter sweep around base camp when Josh spots something on the flir, a weird heat signature. Bobby and Mike also spot something on their flir and head towards it. Mike digs in the area of the heat signature and grabs a sample of the soil to see what may have caused it. Meanwhile, Josh and Ryder are walking through the dark forest and come across a drop and repel down. When they get below, they find a cave and head into it. The cave was very narrow and wet. Josh hears water rushing and decides that they need to get out as fast as possible. Ryder gets left behind. When Josh finds her, she tells him that her light went out and she couldn’t keep up with him. They finally get out and head back to base camp. On the way back, he found some bones and bagged them to be tested later. Meanwhile the perimeter fence went off so Bobby and Mike went to investigate. It was just some cows that wander over the fence.

Back in LA Josh takes the bones to the Museum of Natural History to Jim Dines. He said the bones had hooves and they were from a sheep. The photos of the leprechaun in the pub were probably just Buffalo wings and other assorted bones and not a leprechaun.
Posted by Julie Ferguson at 1:41 PM 4 comments 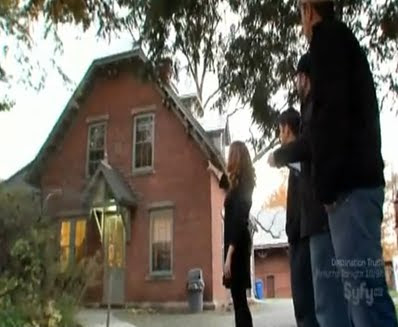 Posted by Atrueoriginall at 6:30 AM 4 comments

Posted by Atrueoriginall at 7:26 AM 1 comments

.
These trailers are dead but you can now watch the full episode on another page.
Click here >>> Shamrock Spirits

The ghosts at an Irish pub leave behind more than a hefty tab.

Posted by Atrueoriginall at 6:53 AM 0 comments