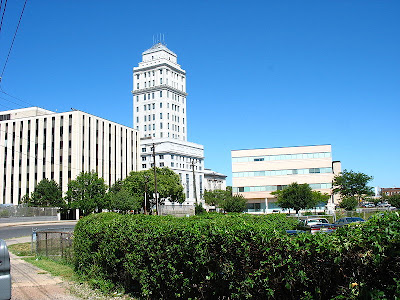 FIRST INVESTIGATION:
ELIZABETH, NEW JERSEY, UNION COUNTY COURTHOUSE
Dave Tango's dad, Bruce, joins TAPS again for this investigation. Jason, Grant and Steve meet up with Ralph, the sheriff, who is going to guide them through the history and haunted hot spots of the courthouse. He starts off by telling them of the four inmates that were executed right outside the building and the history of Hannah Caldwell. They start the tour in the cemetery which is the oldest in the city of Elizabeth and possibly the county of the union. Most of the headstones are from the Revolutionary War and is where Hannah Caldwell became one of the first heroines of one of the Revolutionary battles. One of his friends saw an apparition while looking out the ground floor window and thought is was Hanna Caldwell. She is the first woman killed in the Revolutionary War and buried near the courthouse. Her husband, Rev. James Caldwell, was known as the fighting Parson and led the New Jersey volunteers against the British. He takes TAPS to the ground level room where his friend saw the apparition of Hanna. It was a clear day, with not a cloud in the sky, so the ghostly female image was very clear. Grant asked if there would be any reason for an apparition to be out there and he said that month’s earlier two homeless men had broken into one of the crypts. They were apprehended by the police along with the things they had stolen out of the crypt. The morning that the things were put back in the crypt, is the very morning his friend, Duke, saw the apparition. Next he takes them up to the record room where the double doors seem to open and close on their own. Finally they head into the Rotunda, where an apparition of a woman has been seen many times in the upper balcony.
INVESTIGATION: Lights out and off they go. In the rotunda are Steve, Tango and his dad Bruce talking to the spirits. Bruce asked some questions, while Dave takes pictures. All of a sudden Bruce hears a sound right behind him, like footsteps. Tango walks around to see if that was what he heard. Bruce thinks that it was probably just Tango walking around. Shortly afterwards, Bruce hears the footsteps again. Steve came over with the EMF device and got a high reading. Jason and Grant start their investigation in the Records room. They check out the double doors that supposed to open and shut on their own. The handle was loose and a big wind could rattle the door and make it sound like it has opened. They also tried to get Hannah's spirit to come forward, but got no response. Kris and Amy are investigating in the courtroom seeing if Hannah's ghost might be in there. After an EVP session with many questions, Kris sees a shadow move past a door towards the painting and it blocked out the shininess of the door. In the cemetery, Tango and his Dad find Hannah and the Rev. James Caldwell's gravesides. He said that his Dad is the reason he got into ghost hunting and was glad to be able to investigate with him.
RESULTS: Caught on the mini DVD is an apparition that comes out of the darkness and appears to disappear in the wall of records. The room where the apparition was captured was where they sat with Ralph and can see that there was no place for a solid person to go. Is this the spirit of Hannah Caldwell? This was pretty cool evidence caught. This place was deemed haunted.

SECOND INVESTIGATION:
HOPKINTON, NEW HAMPSHIRE, MACNEIL HOUSE
The home was built back in 1856 with lots of ghostly activity. They meet with the homeowner, Renee MacNeil, who is mostly concerned about their one year old daughter. She tells them that there was a rumor that a family with seven children lived there at one time and five of the children died in the house after a TB outbreak. She felt that there are children spirits in the house. She starts with the 1st floor room which is now a guest bedroom. This room used to be the TV room and they had experienced the couch moving away from the wall even after they pushed it back. Next is the upstairs guest room where Renee's mother, who was visiting, experienced the bed shaking. She also said that their dog kept barking at that bedroom's door until it eventually opened for him. The next place she takes them is the nursery. In this room, the round rug seems to move on its own under the changing table. She takes them upstairs to the family room which used to be the master bedroom. A radio suddenly turns on by itself at a certain time and again after the master bedroom moved to the attic. In the attic master bedroom, she shows them the CD player that turns on by itself. One night while coming home, they noticed the light on in their bedroom. Leigh MacNeil went up to check it out and found the switch in the off position and the light out. He couldn’t find any reason for the light to have been on and then suddenly turn itself off.
INVESTIGATION: Grant and Jason start in the 2nd floor guest bedroom to see why the bed would shake. Jason lies on the bed and found it to be very solid. Grant checks the door that opened for the dog and found the knob to be loose and it will open on its own. Meanwhile, Steve and Tango check out the rug moving in the nursery towards the changing table. They think her stepping on the rug throughout the day could be why it has been moving. Kris and Amy start out in the guest room that used to be the TV room. They found the floor to have a slant to it which may have caused the couch to move away from the wall. Then they hear the radio that Renee report turned itself on and went upstairs to check it out. They investigated the CD player and found it to be a radio/alarm clock that was preset to go off at 2:00 am.
RESULTS: Kris goes to the USGS to see why the furniture might be shaking. She talks with Diane an information specialist who said that it is in the realm of possibility that the shakes could be minor earthquakes and tremors. They did not have enough evidence to support the stories of paranormal activity. They were able to debunk most of the ghostly reports.

Click here to see Judgement Day once more in it's entirety.

Posted by Julie Ferguson at 10:12 AM 2 comments 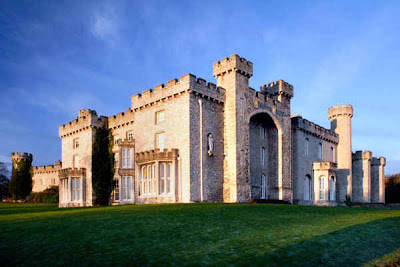 Posted by Atrueoriginall at 6:21 AM 0 comments 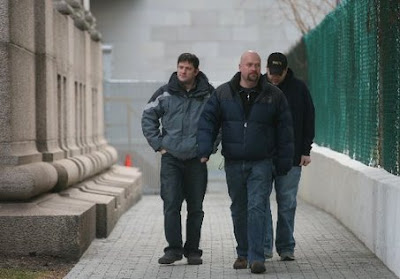 Posted by Atrueoriginall at 6:20 AM 0 comments