These trailers are dead but you can now watch the full episode on another page. Just click on the small picture.

Posted by Atrueoriginall at 6:55 AM 1 comments 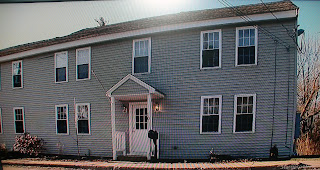 This week, TAPS takes on a private residence in Bellingham, Massachusetts, the Scully house. They bring along K. J. McCormick, a friend that has investigated with them before, to help while Steve and Tango were off doing their show. They are greeted by Michelle Scully, homeowner, who tells them that they have lived there for over a year and a half. The house is part of the mill located by the Charles River. It was originally one house in the 1980’s, and then later divided into three units. The Scullys are worried about their 4 year old son Tyler. He has been telling stories of ghosts in his room and very afraid of a male adult ghost. She starts the tour in the living room by the computer desk. While working on the computer, they have experienced breathing on the back of their neck and someone whispering ‘hey’ to them. From the living room they have seen adult legs of a dark shadow walking up and down the stairs and heard footsteps going up and down the stairs. Joseph Scully, seen a shadowy figure on the stairs, and asked it to show itself. It became angry and began squeaking like a mouse caught in a trap, and keep circling around him. He took a step back and said ‘ok’ and it stopped. While standing in the upstairs hallway, they have seen a shadow figure standing there and then just disappear. During a heated discussion by the Scullys, the bathroom door slammed on its own. There were no windows open or heater on, so there was no explanation for that. In Samantha’s room, a woman was seen levitating in front of the window with old fashion dress on with long sleeves and ruffles. Also, the closet doors will rattle like someone is inside and wanting out. In Tyler’s room, Tyler has seen an older boy and little girl that play with his toys and a scary adult shadow. He is so scared that he sleeps in his parents’ room. Tyler said that they usually leave through the windows. A friend felt uncomfortable while in that room and felt like he was being watched. They usually keep the door shut, and one time they found the lights and fan were on. A medium said it is a portal and whatever is there is dangerous.

Jason and Grant start in the living room doing an EVP session, which some have referred to as a police interrogation. They heard sound like something moving or being dragged upstairs. They ran upstairs, check in Tyler’s room and the attic and found nothing. In Samantha’s room they noticed a stroller near the wall and the bumping against it could be what they heard. They each went downstairs one at a time and realized that was the sound they heard. They moved stroller by bed so it could be seen by the camera.

Britt & KJ start in Samantha’s room. They checked the attic to see if the wiring up there could have caused the high EMF reading, but found nothing. During the EVP session, KJ heard movement behind him in the corner on dresser. They both hear the closet door moved slightly.

Amy and Kris are in the upstairs bathroom when Amy hears a voice coming from Tyler’s room. She said it was a child’s voice. They decide to move on to Tyler’s room, and kept hearing sounds but couldn’t locate the source.

KJ & Britt are now in the living room. While sitting on the couch, KJ experiences the EMF spiking up and down. During the EVP session, Britt got nauseated, moved to another area, and felt better.

Jason and Grant are back in the living room. They asked for some knocking, and heard knocking. Then they heard humming and thumping sounds coming from upstairs. After that they heard what sounded like someone running in the hallway upstairs. They walked over to the basement stairs, heard talking upstairs, and what sounded like someone running up and down the stairs. They went upstairs, and asked the ghosts to show themselves. Jason went downstairs while Grant stayed upstairs. Jason heard walking above him at the same time Grant heard movement in Tyler’s room and someone walking by him. He closed Tyler’s room door had another team come in to see if they experience the same activity.

Britt & KJ are in Tyler’s room when the KII meter jumped and lit up. They asked ghosts to leave Tyler alone, and the older man to make his presence known. Afterwards, they felt heaviness, and heard movement in the closet. They opened the door and found nothing.

The voice Amy heard in Tyler’s room was captured. It sounded like a child’s voice, a little girl singing or humming.

While Jason and Grant were in Samantha’s room, and checking out the attic, a voice whispering a sentence was captured, but it was not clear.

In Samantha’s room, the camera catches the stroller moving. It rolled and then turned slightly to the right. No one was in the house at that time.

They did capture the footsteps that Jason and Grant heard running up and down the stairs.

They felt there was a playful, childish, not negative energy there. They told Michelle that if they wanted the ghosts to leave, they could ask them to.
Posted by Julie Ferguson at 10:40 AM 1 comments

Spirits in the Night - Part 1

Spirits in the Night - Part 2

Spirits in the Night - Part 3

Spirits in the Night - Part 4

Spirits in the Night - Part 5

Posted by Atrueoriginall at 6:56 AM 0 comments

Links to this post
Labels: Ghost Hunters, Spirits in the Night, Syfy


These trailers are dead but you can now watch the full episode of Spirits in the Night on another page. Just click the small picture.

Posted by Atrueoriginall at 2:26 PM 0 comments