NOTTINGHAM, ENGLAND, THE GALLERIES OF JUSTICE 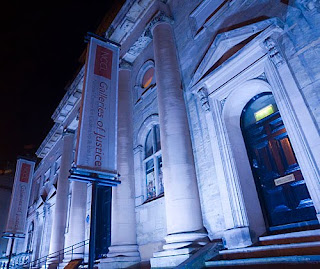 The GHI team is back with Robb, Barry, Paul, Brandy, and Ashley. Along with the returning members is three new investigators; Scott Tepperman from the TAPS team in Florida, and from GHA, Susan Slaughter and Karl Pfeiffer.

The team is met by Martin Jeffery, a tour guide, who will take them around and give the history and haunts for the Galleries of Justice. The rumors are that this place is believed to be the actual birthplace for the stories of Robin Hood. The place once served as the headquarters for the nasty Sheriff of Nottingham. The caves underneath the place were used as prisons and if Robin Hood truly existed, he would have been kept in those caves. There were 123 public executions that took place in the courtyard in front of about 60,000 people. The prisoners usually wouldn’t die from the hanging just be rendered unconscious, then tied to a cart with horses and pulled apart. There were many undocumented tortures of the prisoners that went on between the walls of justice.

In the gallery a white lady has been seen at the top of the stairs and near another wall a gentleman is seen in Victorian gear, dressed all in black. The first place on the haunted tour was the Courtroom Hallway. While standing outside the courtroom doors, a couple of men heard a conversation going on inside the room. When they opened the door the conversation stopped and saw nobody in the room. People have reported seeing figures walking in the balconies of the room, from left to right; also a misty woman shaped figure has been seen leaning over the balcony. The story most told in this room is the appearance of “Justice Black” sitting in the judge’s chair. People sitting in the chair have experienced “transfiguration”, which is the belief that a spirit can manipulate our appearance and is very rare for this to happen.

Next is the Modern Cell Block where Martin experienced hearing a gate open, then footsteps, followed by a lower gate closing. There was nobody else in the building at the time. Other claims are rattling of door handles, things being thrown out of a cell followed by the sound of footsteps. Martin feels this area has the most paranormal activity occurrences.

Next is the Dark Cells or solitary confinement. The place is pitch black, with two cells where the prisoners were kept. A young woman was down there with her friends and could see movement in one of the cells. All of a sudden a black figure leap out of the cell, and pushed her against the wall. She checked her collar bone and found two bruised imprints. All her friends witnessed what happened.

Next place is called Robin Hood’s Cave where no one knows why it was built and fell that it could have been some sort of dungeon. A woman walking through the caves had a feeling like someone was walking behind her and the hairs on her arm stood up. She was too afraid to turn around to see what was there or not there. There have been reports of stones being thrown, and seeing an orange candle light floating around. Through a tiny door in the floor is The Oubliette where prisoners were tossed down and essentially forgotten.

The investigation begins in the Modern Cell Block with Robb and Scott. Right away their EMF meter starts fluxing as Robb asks questions. Robb was feeling chills up and down his back, and asked Scott to put the thermal on him but saw nothing, Robb experienced the hairs rising on his arm, and then there was an instant drop in temperature.

In the Reception Area with Barry and Brandy, Barry takes full spectrum shots with the camera of the entire room. During the EVP session, they hear a noise that sounded like a heavy breath or sigh.

In the Courtroom with Paul and Scott, and during their EVP session, they heard what sounded like people moving in the pews and heard voices. Scott saw a shadow behind him, as they continued to hear a noise, so Paul chases after it. They felt like someone was messing with them. Paul goes upstairs chasing more noises, but can’t find the source.

In the Main Courthouse with Barry and Susan, Barry wants to try out the “transfiguration” stories. He had Susan sit in a judge’s chair while taking pictures of her. Her head felt heavy, and then she felt a slight breeze on right cheek, followed by a sensation down her arm to her fingers. She told Barry that she felt zoned out. Right after that, they heard a loud bang. Susan complained about feeling jiggery.

Now in the Dark Cell with Ashley and Paul, who decided to try a bit of taunting of the spirits. Paul asked to be thrown against the wall, but nothing happened. They heard a woman’s voice and chased after where the noise came from. They decided to sit down on a bench and continue taunting and asking questions. While sitting there, Ashley heard knocking the wall behind her, and felt it vibrate. Paul tried to recreate the noise and vibration, but he was unable to get the exact sound and feel she experienced.

In The Night Cell we find Robb and Ashley, who use a light meter to attract a ghost. This meter can be set to active or passive, and Robb set is too active. Immediately, the light meter was going crazy, so he asks if it was hurting the spirit and did they wanted them to turn it off. The light sped up as if the ghost was saying yes, so Robb turned off the UVP and it quit.

The Oubliette is a tiny tunnel under the dark cell and is where prisoners were thrown and meant to be forgotten. Scott and Paul jump down there and sat down. While in there, they heard a noise which sounded like a faint woman’s voice. They also found more tunnels.

Robb and Barry sit down with Martin. While Robb and Scott were in the Modern Cell, on audio they picked up a voice saying “yes” after Robb’s question, and then picked up another voice saying “get out”.

Paul and Ashley in the dark cell, reordered an answer to their question saying “you’re right”

Robb and Karl asked can you make a noise in the Dark Cell and on recorder caught “tapping” from inside the cell.

Barry and Susan in courtroom with full spectrum camera caught a black mist in one of the photos. This mist appeared when she was sitting in the chair and having all the experiences.
Robb felt the place is haunted which seemed to please Martin.
Posted by Julie Ferguson at 8:26 AM 0 comments

Meanwhile, I just received the following in an email today from Brad Scott at Ghost Hunters Australia and thought I would share it with you.


G'day everyone - Well the new series is well and truly nearing completion.... so for your enjoyment here is the teaser/intro to the new series ( click on the you tube link ). Also the new NZPI Film and Media website will be up soon ( www.nzpi.com.au ), it has taken years of hard work within the field of paranormal research and investigation but what a ride! you will be able to see the new series on http://www.videozoo.tv/ in the coming weeks.

The following will take you to Brad's previous work
http://alienufoparanormalcasebook.blogspot.com/2008/09/videos-nz-paranormal-tv.html
Posted by Atrueoriginall at 9:43 PM 0 comments

The finalists investigate the Stanley Hotel, the location which inspired Stephen King's horror classic The Shining as well being one of the most haunted locations visited by TAPS to date.

Posted by Atrueoriginall at 3:13 AM 0 comments