Wikipedia: "Fort Ticonderoga, formerly Fort Carillon, is a large 18th-century fort built at a narrows near the south end of Lake Champlain in upstate New York in the United States. It was constructed by the French between 1754 and 1757 during the Seven Years' War, often referred to as the French and Indian War in the USA, and was of strategic importance during the 18th-century colonial conflicts between Great Britain and France, and again to a lesser extent during the American Revolutionary War."

Grant was unable to join TAPS for this investigation because his family was sick. Britt stepped in to help out. Some of the many paranormal claims are of soldiers’ apparitions, footsteps, voices spoken in French, floating balls of light, the sounds of drums and bagpipes, breathing and the sound of horse hooves near the cemetery.

Jason and Steve meet up with Chris, curator of collections. He starts with the activity claims in the courtyard. While standing in the middle of the courtyard, a woman heard tapping on glass. She looked all over and saw a man in a uniform on the second floor looking at her through a window. No one was reported being up there at the time. In the Officer’s Barracks a man saw a person wearing a French style uniform, and when he turned around to talk to the gentleman, he disappeared. In a corridor that leads to no way, footsteps can be heard from upstairs. In the Soldiers barracks on the floor 3rd floor, a museum staff saw a red coated figure that disappeared on them. On the 2nd floor, balls of light have been seen coming out of the fireplace, moving up the stairs, or hovering overhead. And on the 1st floor, a woman cleaning a case and heard footsteps behind her. When she turned around, she saw a dark grey smoke that just floated into the wall. Outside at the Garrison Cemetery is where officers were buried and people have heard the sound of hoof beats, and saw shadow figures moving amongst the trees at ground level. There have been no horses reported in the area.

INVESTIGATION: The Officers’ Quarters: While on the 1st floor, Jason and Steve heard footsteps above them. After finding out that no other TAPS member was in that building, they went up to the 2nd floor and check out each room. In the attic, they experience a light in the dark room next to the one they were in. Dave and Kris were in the Soldiers’ barracks and saw the light as well. No one was near that room so they can’t explain what everyone saw. More experiences happened in this building as well. While in the Casemate, Steve and Jason heard a moan and an exhale sound come from a dark area in another room. While on the 1st floor, Britt and Jason took the full spectrum camera (it’s about time they use this), and heard door latch rattle. They found the latch, but couldn’t explain the rattling.

The Soldiers’ Quarters: Tango and Amy wanted to find the source of the footsteps some have claimed to have heard. They noticed the floor boards were creaking, but it wasn’t the sound they were looking for. Tango went outside to check the outside stairs to see if walking on them made the inside footstep sound, but it wasn’t. Finally, Tango found a wooden ramp outside, walked on it, and it sounded like someone was walking upstairs on the floor above Amy. Can you say debunked? While in this building, Steve and Tango, while on the 1st floor near the cannons, heard a noise or voice possibly saying “no”. Tango thought it sounded more like knocking. They replayed the recorder and heard what sounded like a faint voice. While on the 1st floor with Britt, Amy saw a shadow mask right next to her as she moved her head. At first she thought it was Britt, but he never moved. Then they both see a shadow in the distance, and heard tapping or drums from the room above them. Amy went upstairs to investigate, saw a bench that could be what made the noise, but no one was up there.

While investigating the cemetery, Amy and Britt got high EMF readings. There were no power lines in sight. They also heard footsteps and whispering near the woods.

RESULTS: In the Officers’ Quarters, on the 1st floor, Britt and Amy caught the door noise on camera.

In the Soldiers’ Barracks, Britt and Amy caught footsteps on recorder which sounded like something was walking on the floor near them.

Steve and Tango, caught a voice in the Soldiers’ Barracks.

Posted by Julie Ferguson at 10:53 AM 0 comments 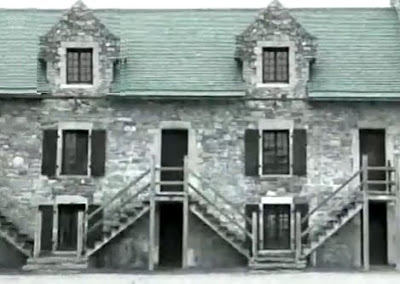 Posted by Atrueoriginall at 6:00 AM 0 comments