Those E! videos don't always work so well so here's the YouTube version.

Posted by Atrueoriginall at 8:35 AM 2 comments 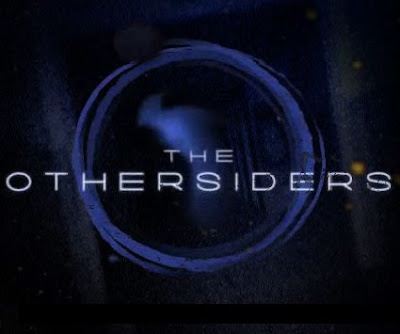 Posted by Atrueoriginall at 5:32 PM 2 comments 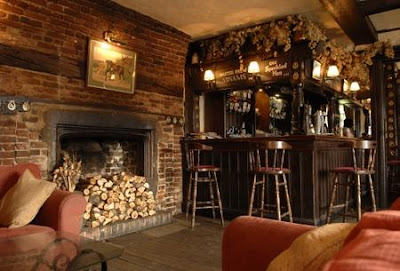 Posted by Atrueoriginall at 4:40 PM 0 comments 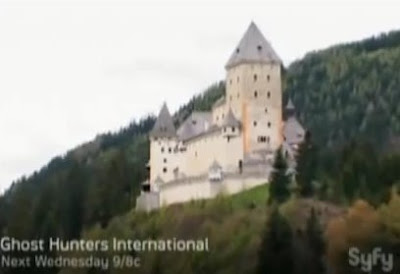 .
When one five hundred year old Austrian torture chamber is investigated, countless spirits may be unleashed.

Posted by Atrueoriginall at 3:58 PM 0 comments

England's Belgrave Hall in Leicester and Scotland's Ragged School of Edinburgh are investigated.
Whispers from Beyond - Part 1

Whispers from Beyond - Part 2

Whispers from Beyond - Part 3

Whispers from Beyond - Part 4

Posted by Atrueoriginall at 12:40 PM 0 comments

Links to this post
Labels: Ghost Hunters International, Syfy, Whispers from Beyond 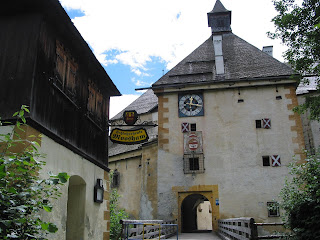 FIRST INVESTIGATION:
Unternberg, Austria
Moosham Castle
This was the first time for the GHI team to investigate in Austria. The Moosham Castle was built in the 13th century, and lots of the history revolves around the witch trials that happened there. People where executed because they claimed to be witches. The castle still contains the torture area and devices that were used. Their guide is Theresita Wilczek, who is the current owner. The castle has been owned by her family since her great grandfather and she has visited the place every since she was 14. She is terrified of the castle and dreads walking into it every time she has too. In the 12th century the people that built the castle were called the Mooshimmers, was a place for the Archbishop to live and a place of torture. Hundreds of people died because of the witches processes there. Later her family bought the castle and is now a museum. She starts the tour in the Torture Chamber. In the 17th century many people died there because there was an Archbishop who said they where witches and it was reason enough to kill the women. Methods of torture included hangings, or tied to two horse going different directions tearing them apart, or they used wooden leg and hand restraints. An employee tells of the time she was in that room with a school class and while standing next to the torture tools, she felt human fingers in her hair. When she turned around, there was no one there. Next they go to the upstairs hallway and stand by the Waiting Room doors. Theresita does not like to go in that room. This was the room where people knew they were going to die. There is a hole in the floor where they fell down into the Judging Room and were usually injured, and then they went to the torture room. Robb asked if they could investigate that room and she told them as long as she didn't have to go inside it would be ok. She takes them down a hallway to Toni's Room who was living in the 18th century and was responsible for imprisoning most of the people in the castle. Dustin asked what happened to Toni and she said he died of old age, but he suffered a lot of pain. Someone on a tour that Theresita was giving, said that he saw Toni sitting in the corner of the room and was talking to him. Next place is the Hunting Room and she also hates this room because it has a bad energy. One day she went with her father in the morning to open the museum and he discovered that all the guns on the racks were up-side down and turned in different directions. The place was locked and nobody could have gotten in. That room was the end of the tour.
INVESTIGATION: Dustin and Barry are in the Hunting Lodge asking for the Archbishop to step forward, and then they heard banging from another room. They follow the noise to the Spinning Room and Barry grabs a door handle to open it and jumped back. He told Dustin that it felt like the door opened by itself from the other side. Robb and Brandy are in Toni's Room, and heard a noise outside the door after asking the spirits to make a noise. They heard noises coming from the catwalk which was empty. Dustin and Barry are now in the Clock Tower and heard footsteps walking across the floor above them. They walked upstairs to the Bell Room but the door was locked and no one could have gotten in. While Joe and Ashley where in the Torture Chamber, they found the room very disturbing. They check out one of the chambers, asking a female spirit to show herself. Ashley heard breath in the corner while Joe felt something touch him in the back. Asking them to come forward again, Ashley felt like someone was running their fingers up her leg. Now Robb is with Ashley in the Torture Chamber. Ashley put her hands in the rack, and shortly afterwards they heard a male voice. They followed where it came from to the Waiting Room where Ashley heard two taps behind her. Robb heard them too.
RESULTS: On the audio in Torture Chamber Robb and Ashley caught the male voice which sounded like it was close to the microphone saying "it's me". They caught another male’s voice saying "Horst" which is a German man’s name. On the full spectrum camera they caught what appears to be a small person sitting on the chair. They think the spirits just want to be recognized and to say hi to them. Doing this will give them the respect that they never got while they were living. Robb concludes that this place is definitely haunted.

SECOND INVESTIGATION:
Spittal an der Drau, Austria
"Schloss Porcia"
In the 1950's, the Schloss Porcia was purchased by the local government and now is a museum, art exhibition hall, and concert hall. Dr. Hartmut Prasch and has worked at the castle for over 20 years. He has heard footsteps and seen objects move. The local police department was dispatched to the castle at one time because the security system went off and no one was there. They could not figure out what was going on. The mayor of the town had his own experiences there as well. The castle is from the 16th century and is over 500 years old and built by a Spainish Count. Catarina was one last of the Count’s family and her ghost has been seen in the courtyard, appearing and disappearing on the second floor and other places. The first place on the tour is the Count's Room. There is a huge picture of Countess Catarina on the wall of the room. What a spooky looking lady she was. He tells them since she was the last of her family; she wanted to hide the family jewels so they wouldn’t fall into the wrong hands. She hired a handicraft to hide the jewelry somewhere in the castle, and then she killed him afterwards in the light with a wooden shoe. The whereabouts of the jewelry is still a mystery till this day. This room has most of the paranormal activity. In a photo taken of the window, a face appears which looks like the Countess. Many pictures were taken of the window but only one had a mysterious face in it. Footsteps can be heard in that room from above or below the room, even in the next room. The Mayor was in the room and was with a group of people and they all heard a strange sound like a chest being dragged across the floor. No one had an explanation for the sound. Next is the Cinema Room is where a paranormal investigation team caught two kids in a photo sitting in the chairs in one of the rows, side by side. Now it's on to the 3rd Floor, is where the false alarm went off. The police heard someone walking around and heard the doors of the restrooms close immediately. They drew their guns because they were very afraid but no one was there. There is only one way up to the 3rd floor, so they can't explain the noises.
INVESTIGATION: In the Count's Room with Robb and Dustin, we see them provoking Catalina's spirit by telling her that they will find her treasure and keep it. Robb heard a noise but it was just Dustin. On the 3rd floor with Barry and Ashley, we find them asking many questions. Ashley felt vibrations as if someone was walking nearby and Barry felt someone near him. They heard something move, like a scratch noise behind Ashley. They heard footsteps in the next room and went to investigate. It sounded like footsteps on a wooden floor but the floors are not wooden. Barry asked Robb and Dustin to do some moving on the floor below but couldn’t hear them, ruling them out. Robb and Joe are now on the 3rd floor to see if they get action and they did. The table moved on them, and felt like it shifted as if it was kicked. They asked for more noises and heard a scratching sound. Joe asked for the spirit to make another noise and they got a very loud noise in the next room. Robb and Joe jump with some cussing thrown in by Robb. Right afterwards the chills went away and it went quiet. Barry and Dustin were in the theatre taking pictures with the full spectrum camera to see if they get the ghost kids.
RESULTS: They start with the photo of the two kids. They show the Dr. their photo where it looked like a form was sitting on the chair. They debunked it as just shadows playing tricks and the camera angles possibly causing the elusion. In the Count's room, the image of the face in the window could have been a refection and lighting in the room giving the effect of a face. This was also debunked. Barry and Ashley in the 3rd floor captured the scratching noise that Joe and Robb also heard. They showed him the tape of the loud noise and table moving in the 3rd floor. Robb had to apologize for his language.....no problem. Based on the evidence they could not say it is conclusively haunted even though Dr. Prasch wanted it to be. Until next week…..
~~Julie~~

Posted by Julie Ferguson at 11:11 AM 0 comments