The Klinge brothers announce the return of an all NEW Ghost Lab this fall on Discovery.

Posted by Atrueoriginall at 6:15 AM 1 comments 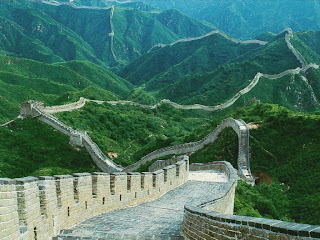 Construction began on the Great Wall in the fifth century and once sealed off the northern border of China. This wall is a landmark, a symbol of Chinese ingenuity, and perhaps even haunted. The Ming Dynasty’s wall stretches for 4,000 miles across mainland China and 50 miles from Bejing, with the crumbling section known as “The Wild Wall”. In this area, locals have reported strange apparitions and mysterious shadows. More recent, several hikers have died along that portion of the wall. Over a million soldiers died building and defending its ramparts. Locals are now saying that the spirits of these soldiers may have caused the recent deaths, seeking some sort of revenge. Other locals have reported strange footsteps and shadows on the wall. Even though the recent deaths and falls have been considered fatal falls or lightening strikes, some believe it was paranormal. Josh and Team Truth have been given special permission to investigate the Great Wall by the Chinese government and will be the first team to do so.

The team flew 14 hours to Bejing, China, population of over 11 million people, and which is a mixture of modern versus old world customs. On the way to his first interview, they passed through the historic Forbidden City, and where Josh decided to give a quick tour in his own comical fashion. They met up with Dr. Zhou Bin, a paranormal researcher, who tells Josh that the ghosts of Chinese warriors still walk the wall. He goes on to say that there were many buried within the wall, leaving some areas with a higher number of paranormal activities and the danger of being possessed by the evil spirits. After the interview, Team Truth looked for some local cuisines to eat such as silk worms and scorpions. The next day they drove 50 miles north of Bejing to the end of the winding roads, and from there they had to take a 5 mile hike to reach the wall. Along the way, Josh stops to speak with Gai Wei, a local folklore expert. Gai tells Josh that because the soldiers were far from home when they died; their souls became trapped within the wall. He said that there is negative connotation of evil spirits going on at the wall. They reached the small village next to the wall where the residences refuse to go up to the battlements, claiming they are haunted. As the roads became too narrow for the jeep, they unloaded their gear and continued on motorbikes with sidecars. The villagers also told Josh not to go alone, it is more dangerous. Team Truth continued on the five mile hike up a steep terrain, alone the wall, repelled down a section of the wall, to get to the section where the hikers died and is known to be the most haunted.

After setting up base camp, all the cameras on the guard towers and other areas along the wall, Josh, Evan, Ryder and Mike checked out the north side of the wall. While hiking to the tower, Josh slips, and they get a heat signature on the flir and felt it could be a bobcat. They arrived at the tower, walked up a shady staircase to the second floor, and sat down to do an EVP session. They start to feel a breeze and the temperature dropping. They all smelt fire, heard a noise, and Josh caught two heat signatures on the flir. They continue in the direction of the two small lights and end up on the top where they are greeted by a heavy fog. They hear what sounds like footsteps but realize that it was birds in the trees below. They head back down where Josh felt someone touch his backpack and thought it was one of the team. He was very scared by the experience and decided to do a 30 minute isolation session. During that time, Josh heard some clicking noises coming from his backpack like someone was touching the buttons. Ryder checks it out and finds his camera was shut off.

A camera at base camp picks up a shadow in one of the towers so Rex and Bobby check it out. They arrive at the second tower but see nothing. They decide to do an EVP session while there. Their EMF detector went off and they both seen a shadow. They chase it down but Rex slips down the side so they return to base.

Back at home, Josh asked Jason and Grant for their opinion of the evidence. They did say that the fog and fire smell could be phantom smells. A voice was caught while Bobby and Rex were conducting their EVP session. It was clearly saying, “Let me be normal”. It was pretty creepy! Josh asked about his physical experience and they said that this happens often with those investigating paranormal.

There were a million reasons for them to try and find the truth about the mermaid spotted in the Mediterrian; the government was willing to fork it over one million dollars if anyone could prove her existence. Of course, Josh and Team Truth just wanted to get to the bottom of the sightings. Many of the sightings have been reported near the small town of Krivat Yam which sparked the million dollar bounty. From the reports, the mermaid has been described as having a fish like tail, covered with scales, webbed appendages, wide set eyes and razor sharp teeth.

Flying over ten time zones to Tel Aviv, Israel, and then headed north 60 miles to Kiryat Yam. The town was riddled with all kinds of fish sculptures and Josh stopped to help out. Josh also talked to some of the locals about their experiences with the creature. One woman tells him that she saw a mermaid for three seconds, and its face looked human. Another man said that he made contact swimming in the water where he felt two hands grabbing his legs. Before heading out, Josh went to city hall and spoke with Naty Zilberman to see if they were going to honor the million dollar prize. He tells Josh that if the story was true, the tourism alone will bring lots of money to the town. Back with the team, they make plans to hit two hotspots where the mermaid was spotted, the caves to the north of town, and the underground ruins to the south. To explore the caves, they rented kayaks, had some trouble with heavy waves, and found the caves just as dangerous. After exploring the caves and not finding any evidence, they quickly got out. Next they headed south to the ruins where over two thousand years ago, most of the city sank beneath the waves. They rented a DT original so-so boat where Josh and Evan dove down to check out underwater. Something huge swam by Josh and the team above saw it on the fish finder and heard a loud squeal. They returned to the surface and decided to get to the main investigation.

They planned to investigation the open waters near Kiryat Yam in the bay. They rented a large boat to use as base camp; a small boat for Josh, Evan and Ryder to cover more water and allow them to dive if needed; Rex stood at a nearby lighthouse to survey the entire area; and Bobby would be positioned on the beach to look for any type of strange activity. After the sun sank and they got into position, Rex spots something in the water. Bobby catches what looks like a head and shoulders in the water near the peer. Josh heads over to investigate and catches something large on the flir and sonar. Josh and Evan dive in to get a closer look and find many of the columns from the underwater city. He sees a jellyfish and something large swim under him in the darkness. He tries to chase it down but has trouble with one of his valves to his mask and needs to surface. The conditions started to get worst so they needed to call it a night.

Back in LA, Josh meets up with the director of the Cabrillo Marine Aquarium, Mike Schaadt. They started with the night vision camera from the lighthouse. He said that they caught something huge but couldn’t identify what it was. He did say that the Mediterrian Monk Seal has been spotted in the area but it was hard to say if that was what Bobby caught from shore.
Posted by Julie Ferguson at 10:30 AM 2 comments 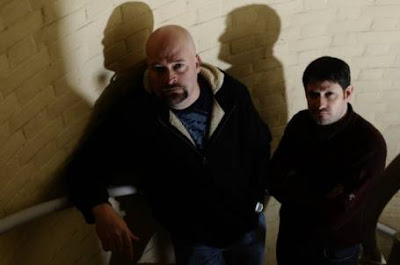 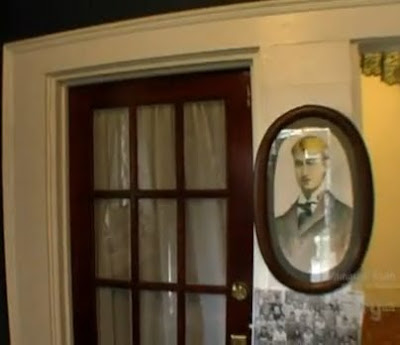 Posted by Atrueoriginall at 7:33 AM 0 comments

The full episode of Phantoms of Jersey is now running on another page - simply click this small picture and it will take you to that page.

Posted by Atrueoriginall at 8:17 AM 0 comments

Posted by Atrueoriginall at 8:06 AM 0 comments