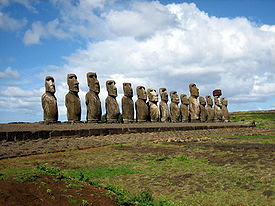 Easter Island appears as a tiny particle of land in the middle of the Pacific Ocean. It is the most remotely inhabited island with its closest neighbors in Chile about 1200 miles away. The island has hundreds of huge statues called Moai ahu that are about 75 tons and carved from volcanic rock. These statues were scattered all over the island and are told to hold the spirits of the dead chiefs they represent. The island natives are called Rapa Nui and have reported strange feelings, voices and apparitions in the presents of these massive statues. Easter Island is only 15 miles long but over 800 of these Moai ahu are dispersed along the coast. The recent reports have been concentrated near Tongariki where the largest ceremonial alter is located. Other reports have been around the Quarry and a nearby forest.

They (1) flew 13 hours to Santiago, Chile and another four hour across the Pacific to arrive on Easter Island. They then drove (2) south to Hanga Roa O Tai, the only town on the island where the natives have lived for over hundreds of years. Rapa Nui script can be seen all over the island which is one of the last untranslated languages in the world. After a brief rap session in the jeep, they met up with a local painter who had a terrifying encounter at the altar. He saw many shadow figures moving by his tent one night and heard voices speaking the ancient Rapa Nui language. Josh asked if he felt they were ghosts and he said “yes, because there was no other explanation”. A Rapa Nui tribal leader also tells Josh that these spirits of his ancestors that guide the island. He goes on to tell Josh that they shouldn’t take the power of these spirits lightly and performed a tribal dance to guarantee their safety. Next they drive to the Quarry near the slopes of the volcano where around 400 statues are scattered about. This place is known as the “nursery” and where the Moai ahu were carved. Many of the locals’ believe that this is where their powers came from. Josh speaks with a park ranger whose terrifying experience has him staying away from the park at night. He tells Josh that he heard voices that were ordering him around and that the island will either except you or reject you. In order for them to gain acceptance they had to go see a local medicine woman who can aide them. This local healer tells Josh that he needed to drink an herbal tea made with an exotic island plant called the Matuipua. This plant is found down in the crater of the volcano where Ryder and Josh use horses (3) to get to their destination. After climbing down a steep ledge, Ryder finally located the plant and they headed back. After drinking the tea, both felt their tongues go numb. They met up with the rest of the team and made their way to the Tongariki alter.

They set up base camp near the alter, and split up into teams and headed out. Rex, Bobby and Gabe checked out the forest and Josh with the rest of Team Truth scouted the alter. The heavy rains made things difficult to investigate. Josh and his team notice a very strange light quickly flying through the air. They see it again and chase it down. They come across another statue where that glow or light flew. All of a sudden, Evan flips out and rips his shirt off. He said it felt like a hand went up his shirt. After that crazy event, they made their way to the Quarry. The area was thick with banana trees. The find a deep cave and enter to check it out. They decide to do an EVP session. When Josh asked “Is there anybody here”, they get a loud creepy moan in response. They move in deeper and hear another creepy moan. The meter goes crazy and shows movement while they hear more voices. They walk in deeper and find nothing.

Meanwhile, Rex and Bobby are checking out the forest and Rex hears someone call out his name. He asked Bobby but it wasn’t him. Later Rex sees a person standing in the darkness and they give chase. When they got to the location, no one was there.

The reviewed the video evidence and had no explanation for the strange light in the sky. The EVP sessions picked up banging, which they dismissed because of the elements. They did catch moaning twice and a voice answering Mike’s question, “hello is anybody back there?” That voice appeared to say, “No, I can’t show myself”, but it was a bit hard to make out. I did count only 3 modes of transportation on this journey, so cheers! 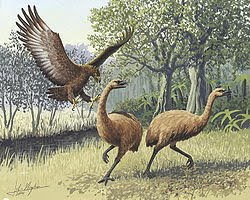 On New Zealand’s South Island is where many have reported seeing a creature they call, “Moa”. This ancient bird was thought to be extinct over 500 years ago as been recently sighted in the area. The Moa is one of the biggest flightless birds and once flourished on the South Island. Recently hunters have encountered this huge bird in the Fiordland area of the island in the thick rainforest area. They have also found nests and bonse high up in the Glacier Mountains on Mt. Cook. Both areas are uninhabited by humans and would be a great place for this massive bird to hide. The Moa is described as fast moving, stands up to 12 feet tall, covered in thick colorful feathers, completely wingless, large three toe claws, razor sharp teeth, with an aggressive demeanor and uses its large powerful neck to attack its victims.

They flew (1) to the south of the New Zealand island to Queenstown. They drove (2) to Christchurch to find the curator of the museum but had GPS problems along the way. Apparently it spoke every language but English. They found the museum and that it was devoted to 12 species of this huge bird that lived on the island. The curator showed Josh bones of the bird so he could get an idea of how massive this creature was. They left Christchurch and headed southwest about 300 miles to get deep into the Fiordland mountains. Along the way they stopped at a small town to talk with Paddy Freaney who gained national attention after claiming to come face to face with the Moa while hiking in the mountains. He tells Josh that he saw the bird, gave chase, and snapped a picture. Because he was running, the photo turned out fuzzy. They continued to Queenstown, known as the adventure capital of the world. Josh, Evan and Bobby took a helicopter (3) to get to the top of the glacier to look around for any signs of the bird. They hiked (4) around, checking out small caves where at one point Josh slide down the side of the glacier. Evan was able to stop everyone from sliding and they continued to check out the area. They took the helicopter back and drove on to the town of Te Anau with over 20 miles of unoccupied countryside ahead of them. They split up into two groups, one would take a seaplane (5) and the other used a boat (6). The join forces and walked (7) about two hours to the area where base camp was set up.

They split up in groups to sweep the perimeter. Josh and Ryder walk through the thick forest and steep inclines. Josh catches something large on the flir so they chase it down. While giving chase, Josh slips off the side and appears to be okay. They find bones and bag them for evidence. The ground becomes very spongy with moss all over the place. They hear a strange bird sound and footsteps in the darkness. Meanwhile Rex and Bobby hear loud noises like coming from a large bird. Ryder finds a large feather, so they bag it and Josh finds a large footprint. Mike also finds a couple more large bird-like prints. Bobby heads towards them with the casting equipment and they took molds of the prints.

They were able to match the strange bird calls to a rare species of bird living on the island. Josh then takes the bones to Dr. Kimball Garrett an ornithologist, who tells them the bones were from a mammal. The footprints could be from a large bird but not the Moa. I did count 7 different changes in transportation for this investigation, so drink up.

Another fantastic season is over and I enjoyed it as always!
Posted by Julie Ferguson at 12:54 PM 2 comments 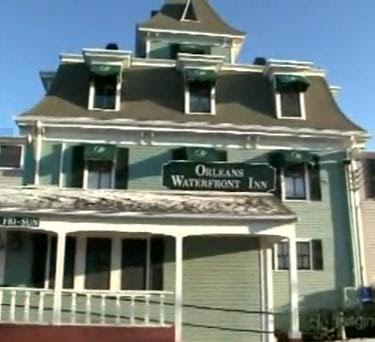 Posted by Atrueoriginall at 9:13 AM 2 comments