Posted by Atrueoriginall at 3:09 PM 0 comments

Posted by Atrueoriginall at 3:08 PM 0 comments

Posted by Atrueoriginall at 3:06 PM 0 comments

Posted by Atrueoriginall at 3:01 PM 1 comments 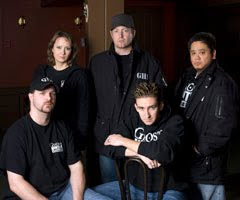 On this season finale, the team is without Dustin again. The Duran Sanatorium was built by Carlos Duran in 1915 on the side of the Irazu volcano. During this time, Dr. Duran was the leading tuberculosis doctor in the country. He built the hospital for those suffering with TB. The building was used as a hospital, an insane asylum, an orphanage, and a maximum/minimum security prison. Some of the reported claims at the sanatorium are several different apparitions seen all over the grounds by many people.

Robb and Barry meet up with Mardy, villa lobo, who wants answers to what is going on in the sanatorium. Their tour begins in the Administration building laboratory where an old lady with white curly hair has been seen. A photographer taking pictures of the building from the outside saw the old lady and started yelling at her. She did not react to his yelling, so he just took a picture of her. When he looked at the photos, she was not in any of them. The next place Mardy takes them is to the Church which is now used as a laundry room. From the outside of the church, people have reported seeing shadows inside the windows. The public is not allowed inside the Church, so no one can explain what the shadows are. Next, they walk over to the Women and Children’s Hospital which is next to the Church. This building has the most paranormal activity from any of the other buildings. They go up to the second floor where many have seen shadows of children just moving from room to room. On the balcony a girl ghost appears to be playing up there. Next is a short walk to the Director’s house. In front of the house, a male apparition was seen by a female eyewitness. On the roof of the house, an apparition of a young girl is seen checking out the view. Whenever anyone goes up to the roof, she just disappears. As people head down the stairs, they see her sitting at the bottom of the stairs. Mardy, herself, seen the girl’s ghost, heard screams and ran back to the main building.

INVESTIGATION: While setting up, Joe saw someone in a window on the second floor and thought it was Paul. It wasn’t him or anyone else from the team. Robb and Ashley start in the Women and Children’s hospital on the second floor with an EVP session. Robb heard a rocking sound moving back and forth on the floor in the room they were in. The EMF meter Robb left in the hall was blinking while they were in another room.

On the Director’s House rooftop is Joe and Brandy doing their own EVP session. Brandy heard a pop sound near the recorder with the EMP showing some movement.

In the Church we find Barry and Paul taking many pictures inside. There was laundry hanging inside and could explain why people think they see shadows moving inside. The clothes moving give off that effect.

Brandy and Joe head to the Administration building where while conducting an EVP session they hear a voice and some footsteps.

Paul and Barry take many pictures outside of the Director’s house to see if the little girl’s ghost will show up.

RESULTS: While in the Director’s house with Brandy and Joe on recorder they caught a voice saying, “help”. On the full spectrum camera they captured something in the window of the Administration building. Also, on the camera they caught what looked like a white figure and the little girl’s apparition sitting on the bottom of the stairs. According to the evidence, Robb felt that the place is haunted.

Annie Palmer is referred to as the “White Witch” of Rose Hall. She was a very cruel and ever menacing individual. Stories told that at a very young age, Annie was taught Voodoo by her Haitian nanny. Annie practiced some of the rituals on her slaves. Many believe that Rose Hall is definitely haunted by Annie Palmer.

The team meets up with Kathy, the property manager. She tells them that the original construction was started in 1750 by George Ash, who passed away in 1780. The house was bought by John Rose Palmer who finished the construction of the great house. John married Annie who moved into the house with all her witchcraft that she learned from her nanny. She lived there eleven years and her marriage to John lasted seven out of those years. She apparently killed him with arsenic.

The tour starts with the Dungeon where lots of paranormal activity occurs and many were brutalized. A bartender saw a shadow moving from room to room, and the bottles on the bar rattle by themselves. Next they go upstairs to Annie’s room. In this room she conducted many of her voodoo rituals and where she was stabbed to death by her slave lover. People have seen Annie’s spirit roaming around freely. In Annie’s sewing room in the mirror, a woman’s face will appear. There are not any pictures of Annie because after her death, all portraits and photos were destroyed.

INVESTIGATION: All around Rose Hall are many noises that the team needed to be aware of. In the Dungeon, Brandy and Joe start things off. While doing an EVP session, they both hear material shuffling against each other.

Barry and Paul start in the building taking many pictures. Paul goes upstairs to Annie’s room while Barry takes many pictures downstairs. While in the sewing room, Paul captures what looks like a face in one of the photos. Barry smelt tobacco and decided to conduct an EVP session. While asking the questions, the tobacco smell disappeared. He asked more questions and to get one more sign. Right afterwards, he heard what sounded like a ball dropping onto the floor.

Robb and Ashley start on the second floor sewing room when Robb immediately hears a female voice. They ask for Annie to show herself in the mirror and Ashley smelt a perfume odor. Robb sets up the EMF detector on a chair and they continue to ask questions. The EMF starts showing some movement briefly but stops lighting up.

RESULTS: They found that a vase in the sewing room was reflecting in the mirror which looked like a face. The weird light on Annie’s bed taken in photos was just the reflection of the headboard. They also caught a mouse running between the bottles causing the rattling noise. Because there was no tangible evidence captured, they could not say the place was haunted. Very good debunking team.

Go here to watch LEGEND OF ROSE HALL once again.

Posted by Julie Ferguson at 9:01 AM 0 comments 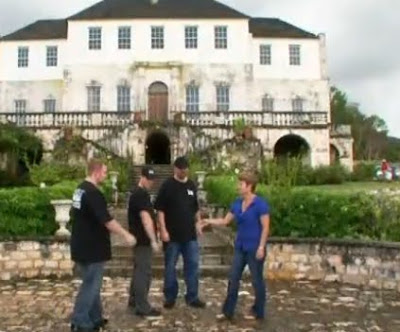 Posted by Atrueoriginall at 8:48 AM 0 comments