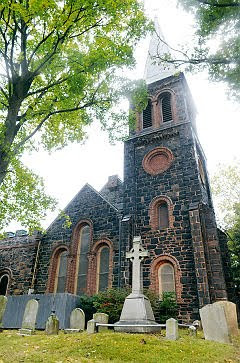 FIRST INVESTIGATION: STATEN ISLAND, NEW YORK, CHURCH OF ST. ANDREW
Rev. Michael Delaney shows them around the church hitting all the haunted hot spots. The church was founded in 1708 and was chartered by Queen Anne in 1713. He takes them to the Chapel first where he tells them that the original foundation was discovered. The original church of 1712 was much smaller and the graveyard came right up to the building. Over the years the church expanded and the bodies were never moved. In 1989, major renovation was done on the church and after digging up the basement, 17 bodies were discovered. Rev. Michael also points out an area where a chilling sensation has been felt by the members of the church. Many feel like there is a presence in the church and have seen shadows in various areas. They move over to the Sanctuary section of the Chapel where a group of kids doing a missionary project witnessed the candles blazing and the chimes moving all by themselves. He also tells them that on Thursday evenings he directs the choir and sits at the piano where he has seen movement going towards the door like white flashes. Next place he takes them to is the storage room upstairs. Witnesses walking by from the outside have seen shadow figures passing by the windows inside. Rev. Michael used to live in the house behind the church and has seen the shadows too. Next place he takes them is where the original foundation of the church is located. Underneath the front steps of the church is where the catacombs are located. People that have been there have gotten an uneasy feeling and chills. He said that when he goes down there, sometimes it feels like someone is walking through him. One of the church members that take pictures for the church went around taking pictures of the catacombs. She took several pictures and in one of them is a ghostly image of a noose. The next place he takes them is the cemetery. The story here is that a little drummer boy that has been seen as well as heard. The sound of drums can be heard in and around the cemetery. This was the last place he took them, so now it is time to investigate.
INVESTIGATION: Jason and Grant start things off in the chapel. They first went over to where the chimes and candles were to see why the candles would light by themselves. They found a floor vent which could explain that when the air kicked on it could move the chimes and add oxygen to the candles lighting them. Then they noticed that a black shadow walked by the back window blocking out the light. Jason went outside to see if something out there block the window but found nothing. Kris and Amy start with the catacombs to see why people feel uncomfortable down there. Amy asked questions and did some provoking to see if she could get a response. They hear a shuffle from a back area but didn't find anything. Steve and Tango begin in the Storage room to see why people are seeing shadows in the window. Steve went outside while Tango walked past the window and sure enough he looked like a dark shadow figure walking by. They gave another reason for people seeing these shadow figures in the windows. Kris and Amy are now in the chapel where they hear noises. They asked for more noises and hear some bumps right behind them and in the pulpit. Steve and Tango went to the cemetery next to see if they can hear the little drummer boy. They immediately hear a noise but couldn't find the source. Steve did some drumming to see if the drummer boy would join in but he didn't. After that they decided to rap things up for this investigation.
RESULTS: They look at the picture of the ghost noose and debunk it as a possible string or hair. Kris did research and found out that there was a little drummer boy shot and killed and buried on the property. Based on lack of evidence, they could not say the place was haunted.

SECOND INVESTIGATION: CHICAGO, ILLINOIS, BENTON HOUSE
They are greeted by Angela, Director of Programs, who gives them the history and takes them to the areas where ghosts have been reported. The house was built in 1907 and opened its doors in 1909. This house is where a lot of town meetings where held and the Daily family also was known to have political ties to the house as well. She starts the tour in the downstairs living room where there stands a fireplace and the most recent activity occurrence. A witness and two of his friends were in the living room cleaning up and used a starter log to clean the flue trap. He was telling them stories about his great-grandmother dying at the doorway and all of a sudden the fire on the log went out and made a sizzle sound as if someone threw water on it. Next place she takes them is the residence common area. She points out the library door that has a tendency to slam by itself. One time a group of students asked Angela's boss if they wanted the library door shut and one of the girls said, "don't worry Ma Benton will get it". Right after she said that, the door slammed shut. Ma Benton’s ghost and presence has been seen and felt throughout the house. The next place she takes them is her bedroom. One evening while lying on the bed, she heard footsteps in the hallway walking towards her door. She heard them come in the door and stop. She turned around to see who was in her room and no one was there. She never heard footsteps leaving the room. She takes TAPS to the other building which is the Gym building. They go upstairs to the Art Studio where a man kept hearing a voice saying something like "Gaylord was hurt here and his family was lied to". Lastly she takes them up to the Gymnasium. One time after an event, the executive director was clearing some of the tables, and after lifting one, they felt like an unseen force stepped on the table knocking it to the ground.
INVESTIGATION: Jason and Grant start their investigation on the 3rd floor and immediately they see a small dark shadow, like a child, in one of the rooms. Next, they sat on Angela’s bed with each taking turns walking down the hall and turning into the music room next door. It did sound like someone entered her room and the footsteps could have been someone going into the music room. Steve and Tango started in the gymnasium where they sit on the floor and asked questions. They didn’t get any response. Jason and Grant are in the living room where the fireplace was at. They use a starter log to see why the claims of a log going out by itself could be true. They did find a very high EMF reading on the floor but the log never went out. Kris and Amy are in the Art room checking out the claims of voices in that room. They also did not get any action. Jason and Grant are now checking out the 3rd floor library door to see why it closes by itself. Grant asked the spirit to close the door for them and it does. After checking out the library, they come to the conclusion that a strong breeze was what could be closing the door.
RESULTS: After a long night, they didn't catch any evidence but did have some interesting personal experiences.

Posted by Julie Ferguson at 11:07 AM 2 comments 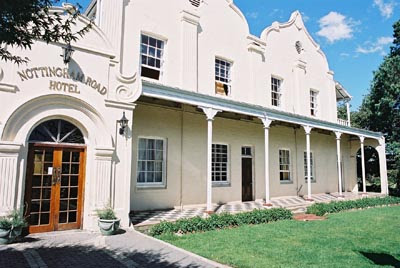 The team travels to Cape Town, South Africa to seek out a spectral prostitute in a hotel and a strange phenomena attributed to a soldier's grave site.

Posted by Atrueoriginall at 9:09 PM 0 comments 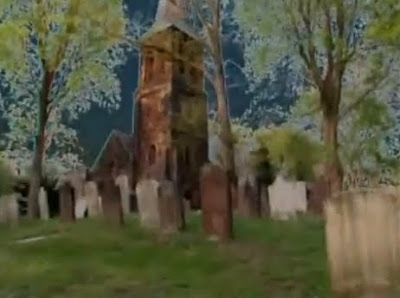 Posted by Atrueoriginall at 9:09 PM 6 comments