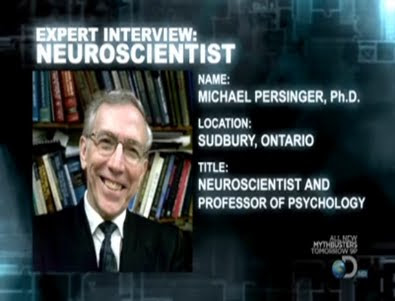 Persinger is known well for these words, "This Is Your Brain on God - Michael Persinger has a vision - the Almighty isn't dead, he's an energy field. And your mind is an electromagnetic map to your soul."

The Klinge Brothers and the Ghost Lab team head to Chicago and Forth Worth to investigate a pair of allegedly haunted hotspots: A tattoo parlor and a former bordello now serving as a bed and breakfast.

Posted by Atrueoriginall at 7:11 PM 0 comments

Links to this post
Labels: Ghost Lab, Michael Persinger Ph.D., Under the Skin 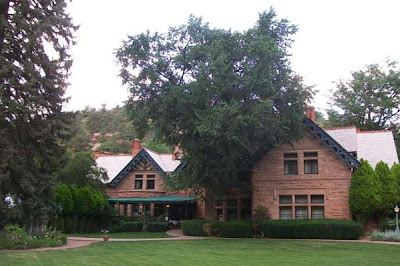 Manitou Springs, Colorado, Briarhurst Manor
This place was the runner-up in the "Great American Ghost Hunt". Some of the reports of activity is people seeing an apparition of a young girl with red curly hair, an apparition of a skeleton-like woman, hearing phantom voices, sounds of kids bouncing a ball, objects moving on their own and found in odd places. Briarhurst Manor was built in 1888 and is 1,400 square feet. Dr. Bell was the co-founder of the Denver Rio Grande Railroad and built the house as a home away from home. His first home was in England but he used this home to tend to his many businesses. He established over 30 companies in Colorado. After giving the history of the place, Ken Healey, the owner, turned the touring reigns over to Tammila Wright, the one that entered the Briarhurst Manon in the "Great American Ghost Hunt". They start the tour in the Conservatory where Ken Healey was talking to over 200 people in the room and the vase on a side table flew off in front of everybody. From that room you can see the Orchard where her step-father used to see a skeleton-like lady, who had white flowing hair and dress and called him by name. Another witness, Eric, tells of a time when they were cleaning up after entertaining a group of people. He heard a voice say to him, "Eric, do you know why you are here"? He turned to the man behind him and asked if he said it and he told him "no". Next place she takes them is the Drawing room. A wall in the corner of the room is where Ken saw the wallpaper bubbling up. He went over to touch the paper and a red, foul smelling substance oozed out from it and started flowing down the wall. The wallpaper is from 1890 and it was discouraging that this substance ruined it. The red ooze gave the wall its name, “the bloody wall”. The next place to check out is the Dining room where a couple dining at the table by the bay window put on their comment card, "that they enjoyed the little red-head girl that played outside their window the entire time". A month later, another comment card had the same thing on it about the little girl. After seeing pictures they realized that one of the Bell children fits the description of the little girl. Next place on the tour is the Foyer where full body apparitions have been seen, footsteps could be heard on the stairs, and a kid bouncing a ball on the landing. She takes them up to the hallway next where shadow people have been seen by some eyewitnesses. Down the hallway to the Palmer room is where the Bell children’s bedrooms used to be. A witness tells about the time while outside sitting in the gazebo she glanced into the window of the Palmer room and saw a lady with her hair pulled up just sitting there. When she got in the house and saw a picture of Mrs. Bell, she realized that is the person she saw in the window. Other things that go on in that room are on a rainy day they can hear footsteps above in the attic. When it rained, the attic became the Bell children's playground. This marks the end of the ghost tour and now on to the investigation.

INVESTIGATION: Jason and Grant get the investigation going in the Palmer Room. Using the thermal they walk around and hear a creaking sound above them in the attic area. When it rained outside, the Bell children liked to play in the attic. Grant walked on the creaky boards in the attic while Jason went back down to the Palmer room below. The sound Grant made on the floor boards was the exact sound they both heard while in the Palmer room.

Steve and Tango start in the Foyer. The do an EMF reading while walking up and down the stairs and in the foyer. They decide to do an EVP session to see if the little boy seen by witnesses shows himself and makes his presence known. Steve notices a cold spot next to him which came on suddenly. Steve found a door in the kitchen opened and realized that is probably where the cold came from.

Jason and Grant back in the Palmer room and see a long thin light at the end of the room. They heard footsteps from above them with nothing being up there. They asked for more noises in the attic and got them while the KII lights up like crazy. They call for Kris and Amy to check out the Palmer room to see if they experience the same things. Right away they heard the footsteps coming from the attic. They head up to the attic to see what is causing the noises. While in the attic they saw no one up there and could explain the footsteps. They found a small door leading to another room and sat in there asking questions but it was just dead silence.

In the Dining room is Steve and Tango. They sit at the table where the patrons seen the little girl playing outside. They tried to get her attention but noting happened.

Jason and Grant were in the Drawing room checking out the "bloody wall". Right above the wall is a bathroom not being used anymore so they went up to check it out. While up there they hear a girl's voice in another room. They found a red cleaning agent in the bathroom which could explain the blood red color and foul odor in the wall.

Tango and Steve are outside and while walking around and apple came rolling up from behind them. They found the tree and thought maybe it could have just fallen off the tree.

Jason and Grant are back in the Palmer room, while sitting at a table, they ask questions. Jason hears a female voice and a couple minutes they both hear it. They realized that the girls were outside and called them to see if the voices were them. They were on the other side of the property and so it wasn't them.

Kris and Amy are walking outside on the property looking for the "skeleton woman". They asked her to make her presence known and they see something in the woods surrounding the place. They heard a noise and checked it out. The motion detector light turned on and scared them.

Meanwhile, we head back in the Palmer room with Jason and Grant. They head down the hallway to the office where the computers were at and heard something moving in the dark. They found nothing explaining the voices.

In the Conservatory is Steve and Tango checking out the flying vase story. They each sit at a table and ask questions to the spirit or spirits that have been seen there. Steve heads out to see what is behind the wall where the table and vase sit. Steve tried opening a door with a dirty mop, but just sprayed Tango all over with the gross stuff on it.

This place has a residual type haunting and paranormal activity.

NEXT WEEK THE FINAL RESTING PLACE FOR BUFFALO BILL.

Posted by Julie Ferguson at 9:34 AM 2 comments 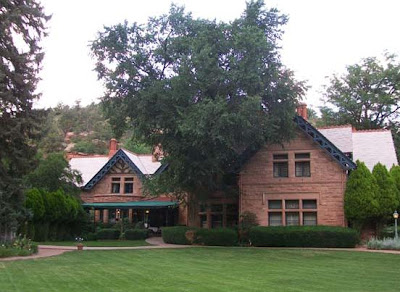 Posted by Atrueoriginall at 11:19 PM 0 comments 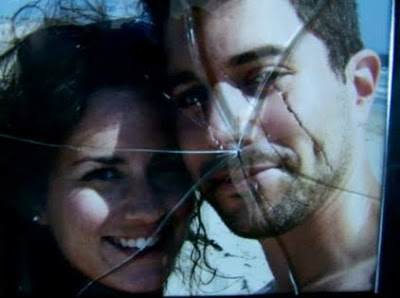 Posted by Atrueoriginall at 9:03 AM 0 comments 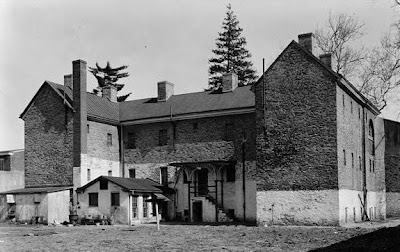 When Dave Tango's father has a creepy experience in the Burlington County Jail Museum, TAPS heads to Mount Holly, NJ to investigate. Then Jason and Grant turn their attention to a Norwich, Connecticut family's home where a child is afraid to sleep in her own bedroom because of strange experiences.
Two to Tango - Part 1

Posted by Atrueoriginall at 8:39 AM 1 comments

Fort Mifflin in Philadelphia is investigated. The site was used as a garrison during the American Revolutionary and Civil Wars.
Fort Mifflin - Part 1

Posted by Atrueoriginall at 6:36 AM 0 comments