In this episode, Ashley had a family emergency so Paul Bradford is taking her place. He is another TAPS member and is also a tech specialist. He will be assisting Barry and introducing some new equipment such as a static camera that increases night vision by increasing the range. 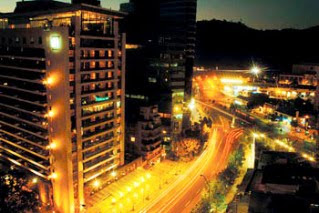 ALL
In the early 1900's El Bosque City Hall was used as a reform school for orphans who were operated by the Catholic Priests. Later it became a retirement home for those priests and is now used for a government center which holds the office for the mayor. Some of the paranormal activity reported there is full body apparitions, the priest’s ghosts have been seen in numerous places around the city hall, staff has reported hearing the sound of children playing as well as crying throughout the area. Carlos, a local historian, is their guide and begins by giving them the history of the place. The building was built by Eusebio Lillo and afterwards was designated to be an orphanage. The place was once used by the Air Force where they tortured alleged communist. Human Resources Office is the first place he takes them. This room is where two secretaries were sitting in the room and saw the priest Father Juan pass through a door and then disappear. This all happened while the door was closed. This room used to be the bedroom of Father Juan which is why his spirit is seen there often. On the main staircase of City Hall, a priest in a robe was seen by a cleaning lady at 2:00 in the morning. She said, “Excuse me sir”, but he just kept going. She followed him for a little while until he just vanished in thin air. In the Basement there was a political coup. In 1973, when the military took the power from the country, many people disappeared and were brought to this area where they were tortured, even possibly murdered. The Domestic Violence Office is where on many occasions the people working there would leave the office, locked the door and when they came in the next day, they found the office a complete mess. Things were thrown all over the place and the computers were on. This is still going on till this day. Next is the Archives Room where when they rebuilt city hall, and discovered a door which once opened, they found kids shoes, clothes on the floor and cages. It was believed that the kids were kept in those cages. Robb asked it that was the punishment room for the orphanage and Carlos agreed. In the Garden at night when the people are cleaning and the offices were closed, the staff would hear many noises of children crying and no one was outside at the time. A security guard who was conducting his rounds at 2 or 3 am noticed that someone was in the garden area in the security camera. This person was wearing a robe and on his knees. When the security guard approached the figure it disappeared before he could reach him.
INVESTIGATION: The investigation starts with Robb and Brandy in the Domestic Violence Office with a multi charge meter. They leave the room see if the meter gets some action while they were gone. While taking pictures in the hallway, they heard something in the office, like shuffling around. Robb opens the door and the static meter was all the way lit up. Nothing else was moved so they hope the digital recorder caught something. Joe and Paul start out in the Courtyard where they set up one of Paul's cameras. These cameras will take pictures if the motion senor is set off. They heard a noise like someone was running around and chased after the noise. Paul sees the flash from the camera go off but found nothing on the camera. The wind could have blown something in front of it. Now Robb and Brandy are in the Archives room where they set up a multi charge meter and got action right away. The static meter starts blinking until Robb asked for one light on and the spirit complied. Then he asked for more lights on and it did exactly that. Joe and Paul are now in the Basement where Paul sees shadows around Joe. He takes some pictures and got a heaviness feeling in the room. All of the sudden Paul jumps and said that it felt like someone just pushed his head down, like a hand touching his head. He needed to get some air so they went outside. Dustin and Barry are in the basement where after asking some questions they hear noises. Barry hears the full spectrum camera making noise but finds nothing. They go up to the second floor office where Barry sees something moving across the door down the hallway.
RESULTS: The Full Spectrum Camera shot in the doorway second floor office had one shot clear, next shot complete white out, and then the third shot good. Since Barry couldn't figure it out, he just let that evidence go. In the Basement with Joe and Paul, Joe caught Paul's reaction on his camera after Paul felt an unseen hand touch him. The wireless recorder in Father Juan's room caught the sound of the chair moving and the other sound was like a door moving. The EVP in Domestic Violence Office caught a response to Robb’s question, “where do you go after you die?” the response "hell". In the basement, the recorder caught a voice saying "we're here." Robb said that he felt that there was lots of spirit activity there. 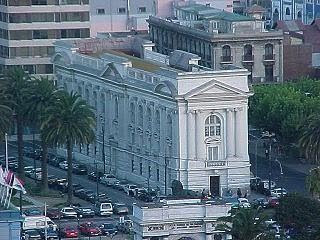 Paul is back investigating with the GHI team. The Santiago Library was the second library built in Chile. The staff of the library has been experiencing some crazy stuff like full body apparitions, and knows who the ghosts are. They think one is of an old director and his wife who has been seen walking through bookcases and disappearing. Gerry, local historian and their guide, tells them that the library plays a very important part in the community. In 1912-1919 the library was built by Santiago Severin, a very wealthy philanthropist. The library houses about 18,000 books. He takes them to the Living Quarters of the second director of the library and his wife. On many occasions the librarian kept hearing the door knob jiggling like someone was trying to get in, but no one was there. She felt that the noise was the wife of the director that used to go through those doors every night to church. The Basement stairs is where a strange coolness was felt and like someone was breathing on the back of their necks. Basement Stacks is where a woman in a black dress has been seen and the staff calls the "black lady". She appears to have no feet and floating above the basement floor. In the Repair room a worker came down to talk to a repairman, and as he was talking, he noticed an apparition over his shoulder by a doorway. Juanito was a janitor who died in 1996, and whose spirit was seen by a janitor and many others. The janitor noticed his reflection in a glass door and suddenly saw Juanito standing right behind him. He ran upstairs and decided to never go down to the basement by himself again.
INVESTIGATION: Robb and Paul in the theatre in the library doing an EVP session. Robb hears a noise coming from the stage and speaks to the spirits in Spanish. He keeps hearing a whisper on the stage and Paul hears it too. They check out the back of the stage and any explanation for the disembodied voices but found nothing. Robb again speaks to them in Spanish and heard a sound like someone sat down on one of the chairs, like a shuffling sound. In the basement we find Dusting and Barry. Barry hears rustling from down the aisle in the dark and felt a cold draft moving from one side of the room to the other. Brandy and Joe went to the director's room but got nothing.
RESULTS: Dustin in the basement library on the thermal cameral they caught what looks like a person but debunked as a reflection of Dustin's body. Robb and Paul in the theatre caught the sound of the chair moving. No evidence of the paranormal was captured by GHI so they couldn’t say it was haunted.

Join me next week for the original Ghost Hunters season premiere with Jason, Grant, Steve, Tango and Kris

Posted by Atrueoriginall at 1:06 AM 0 comments