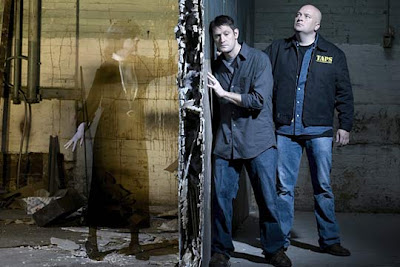 FIRST INVESTIGATION:
BLACKSTONE, MASSACHUSETTS
LADOUCEUR HOUSE
In this season premiere show the TAPS team starts their investigations in Blackstone, Massachusetts, at the LaDoucheur house. Roxanne LaDoucheur, her husband Chuck and teenage son Gabriel all live in this seemly haunted house. Roxanne shows Jason, Grant, and Steve around and hits all the hot spots. She starts in the living room where while she was lying on the couch one evening, and her husband was on the computer, they heard a loud whack on the couch. The next place she takes them is the basement where they all heard something hit the washing machine. It was very loud and they were all upstairs and heard it clearly. When they went down to investigate, they found nothing. Her son actually got attacked in the basement. Gabriel tells us that he saw about a 5 foot black mass shaped like a person, run at him. He ducked down and felt his shirt pulled from behind. He spun around quickly and it was gone. He just stood there, frozen with fear and yelling for his Mother and Chuck. When they got to him, they noticed that he was completely pale. She takes them to the second floor in the master bedroom. One time she noticed the closet light on and no one had turned it on that day. The closet door was also open and Chuck distinctly remembers shutting it. Jason asked if they could investigate the crawl space in the closet. Before he was married to Roxanne and living in the house alone, Chuck said that he was woken up by a growl in his right ear, as if something was right there. He was in a deep sleep at the time.
INVESTIGATION: Kris and Amy start out in the basement. They both hear a very low gravely voice and played back the tape. They captured a voice saying, "Please help me". It was very clear, like it was right near them. Steve and Tango are in the Master bedroom and start with an EVP session. They both hear a noise like three knocks. Not much happened after that. Jason and Grant are now in the basement. They did a sound test by tapping on the ducts and slammed the dryer door. It sounded like the loud bang Roxanne had mentioned and looks like that noise was debunked. Now it's the KII meters turn. After asking questions, they got action, the meter lit up. They asked if the entity was inhuman and it lit up with a yes. They concluded that a negative entity was holding the other spirits that were there. Jason tells the spirit that they are going to taunt the evil entity and asked where the entity entered the home. There answer was in the crawl space upstairs in the master bedroom. They go up to the crawl space and immediately hear a growl. They attempt to remove the demon spirit by taunting it. They kept hearing all kinds of noises like footsteps and sounds. Their video camera had its batteries drain down. Jason feels his right calf muscle get cold and then hot. He lifted his pants and saw five scratches on his leg. They felt that it wasn't a typical demonic spirit but could possibly be a playful ghost pretending to be evil and scaring people.
RESULTS: Captured in the crawl space with Jason and Grant was a voice, very low and gravely. They actually caught two voices and one didn't sound like it was in English. Kris did research on the house and found out that the second owners were German. Also, at some point, a woman did die in the home. He had Roxanne listen to the voice that Amy and Kris captured in the basement and asked if she had every heard that before. She said her neighbor did hear something like that coming from the basement. Jason said that their home was haunted by an entity that needed to leave and was playing around and trying to scare the family. He felt it wasn’t truly an evil entity.

NTSVILLE HISTORIC CENTRE
Some of the claims of ghostly activity at the Brentsville Historic Centre are colonial apparitions, one being named Agnes who was a slave and was hung for murder. Supposedly she murdered her master with a butcher knife. Another apparition is of James Clark who was imprisoned and accused of abducting and killing a woman. Witnesses have experienced objects moving, cold burst of air, with the witness believing that it all the activity can be traced back to the 13 people who were executed there. Robert, who is the site manager and very skeptical, is interested to see if TAPS can prove him wrong. Brentsville, Virginia was founded in 1820 as a courthouse town for Prince William County. By 1850, about 500 people were living there. The residences of Brentsville have report paranormal activity as far back as 50 or 60 years ago. In the courthouse faces have been seen in the windows, especially in the judge’s office upstairs. He takes them upstairs to see which window it was. Some say it is a man dressed in a gentleman's outfit from the 19th century and others say it is just an outline of a face. Robert takes them to the jail next door where most of the activity takes place. A volunteer named Morgan was walking outside by the jail and courthouse and noticed a black woman's face looking out from the door of the jail. He turned away and quickly looked back and there was no one there anymore. In the jailhouse on the 1st floor Jason, Grant and Steve noticed that the place was not yet refurbished. The first room they stood in was where James Clark was murdered and many have reported hearing voices, usually a male voice always sounding angry. He has said "get out" and called some of the women derogatory names in a very angry voice. Next he takes them upstairs where in one of the original cells, which was very small, and a white mist has been seen. One eyewitness, Georgia, saw it while peeking in the window. She described it as a gray white mist moving across the room and out into the hallway.
INVESTIGATION: Jason and Grant start out in the jailhouse and got a thermal hit right away. It looked like a human form almost like the image was burned into the camera. They head up to the second floor and hear footsteps in the next room. The go in the room to check it out. The footsteps now sound like they were coming from another room or above them. They noticed the attic door was opened and realized that is where the noises were coming from. Grant gets up there with the camera but finds nothing. Amy and Kris meanwhile are in the courthouse to figure out why people are seeing faces in the windows. They decided to split up with Amy going downstairs and Kris staying in the judge’s room but nothing happened. Steve and Tango start their investigation in the jailhouse. Steve kept feeling like his head and ears where ringing while in the room that James Clark was shot in. Steve hears a buzzing sound and notices a big yellow jacket bee in the corner.
RESULTS: On the thermal Steve checks to see if the image they saw could be Jason’s but they didn't think is was him. The image moved with the camera and then disappeared when the camera was still. Jason could not say if the place was haunted or not, and needed to come back to be sure.

Posted by Julie Ferguson at 9:40 AM

You know you do good recaps when I can't wait to read your recap as much as to watch the new episode. I found it to be their typical fare. I sometimes wish they'd shake it up. I get so tired of the phony walkie talkie explanation on the way to the site (like they weren't briefed earlier) and the recap and knuckle punch at the end. I'm glad they got rid of them pretending to be plumbers. If Roto-Rooter sends 2 guys to fish a ring from the toilet, they're overcharging me. I watch it now kind of like the Gene Simmons show--I know it's staged, but I like the characters enough to care how they handle the directions. I was pleased by the KII session, but disturbed by where the device was located. They didn't seem to do much to help resolve that woman's issues, so I wasn't too happy with that. They could have at least devised a team of blessers/sagers who go through places when they're done. I think from a feng shui point of view, that crawlspace in the bedroom was begging for activity. I'd definitely change up that place's layout and open up the crawlspace to be part of the closet and finish it off, let some light in. Seems like the house's cul-du-sacs are always an issue. Anxiously awaiting something new--wish they'd start using their head helmet camera again--that was put away too early.

They never seem to actually help any of the people. What's this, "just tell the 'ghost' this is your home and to leave" and how exactly did they figure out that this entity was just pretending to be an evil one...disappointing.

The only way I can get any of this info is when you all do your re-caps so it is definitely appreciated!! thanks for your hard work!!