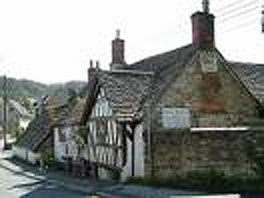 LOCKDOWN: Before they were locked inside, Marc, John's grandson, told them about seeing an incubus on the stairs. Now they are locked in. The front room, grave pit, the
Barn, the Witch’s room, the Bishop’s room, the stairs where the photo of an apparition was taken, is where the static night vision cameras will be placed. First thing, at 10 pm, Zak lies in John's bed to see if he is attacked like John had been. He hears loud noises behind the camera as if something was being torn. He got up and found nothing and met up with Nick and Aaron to begin the investigation. Starting in the main part of the Inn, they walk into where the grave pit was. Zak stands in it and starts digging to try and stir up the spirits. They asked for a noise and captured a knock. All of the sudden it gets cold, they hear a female disembodied voice saying "I don't like you". Now it is 2:17 am and we see them going upstairs to the Bishop’s room where John got that possession. While up there, they caught a banging noise from downstairs on the camera down there. Zak taunts more and shortly afterwards they heard loud noises in the attic. They go up there and see an alter, with some strange powder on it. Aaron captures on his camera something coming from the Bishop’s room, a shadow figure. They go into the Bishop's room where and a few seconds later the camera in the attic caught a demonic growl. In the Bishop's room, Zak hears a voice and caught it on camera saying "It's coming". Having two camera set up in the room they lay on the beds and got a strange disembodied voice saying "Hate you" after Zak asked a question. Now it’s 4:45 am, Nick and Zak are investigating other areas while Aaron waits in the Barn near the fireplace where the kid was picked up. He captures a voice saying ".....where are you?" Nick and Zak also captured a voice saying "get out of here" then they pick up knocking from the above floor. While Zak checks out the Witch’s room, he hears a female laugh that he felt was taunting him. Nick in the room where the earlier ritual was performed, captured non-stop paranormal activity such as footsteps, voices, knocking, and breathing. Aaron was experiencing activity as well and captured a voice saying to him "don't tempt me", after asking to be lifted like they did the boy. Zak is experiencing wild EMF readings, then suddenly back to zero. Right after getting with Nick the picking up Aaron and leaving the barn, their camera captured a female voice saying "I'm special". Zak tells of his very disturbing dream he had the next night after the lockdown. It was of a lady and all he could see were her eyes and that she had long hair. She was wiggling her fingers with long nails in front of his face. He actually could feel the hurt of the nails and woke up from it with his heart beating fast, and breathing heavily. He thought that was it at least that was what he thought. When they got in the car, Aaron noticed three scratches on Zak's neck which didn't happen in the moment while investigating. It was like Lady Snake said; it followed him home and may have the incubus attached to him. This was another very strange Ghost Adventures episode.

Posted by Julie Ferguson at 4:54 PM