Washoe Club and Chollar Mine on Dec. 4 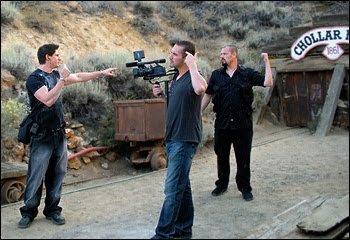 The Ghost Adventures team returns to Virginia City, NV, the site of their very first investigation and documentary. The angry spirits in this old western mining town have been waiting for their return. Now they'll get their chance to confront Zak, Nick and Aaron once again during the Washoe Club lockdown.

Virginia City, NV, rose to prosperity as a center for silver mining in the Old West, becoming the nation's first true industrial city. The mining industry made way for a bustling and even cosmopolitan city life with cultural institutions like the opera and famous residents like Mark Twain, who wrote for the local newspaper.

Today the town only hints at the former wealth of the mid-1860s when adventurers and prospectors risked everything to grab a piece of the rich earth. At the time, danger lurked at every turn -- cave-ins, gunfights and greedy claim jumpers. Nowhere was this drama more prevalent than Virginia City, or "Old Virginny Town" as the locals called it, where the mining industry turned men into millionaires.

The Spirits of Chollar Mine 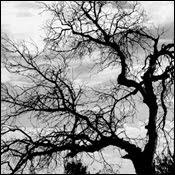 Chollar Mine was one of Virginia City's most successful mines. Businessman Billy Chollar discovered the silver lode and established the mine around 1859. To keep close tabs on his riches, Chollar built a mansion nearby, which became the mine's main office. The mansion was later dismantled and rebuilt at its current location on D Street to make way for the mine's pumping station.

Chollar's men worked at furious speeds to bring in the rich silver before other companies found it. His greatest rival was Potosi Mine and the competition was intense. Arguments between the 2 companies led to violence and lawsuits that were finally settled in 1865 when the mines merged to form the Chollar-Potosi Mine.

The mines brought riches and glamour to their owners, but the miners were vulnerable as they tunneled through the ground searching for silver. Cave-ins were common and an explosion in the main shaft killed many men. But even death didn't stop the owners on their quest for more wealth.

Today there are reports of roving apparitions and disembodied voices in this otherwise silent place. Visitors share accounts of being touched by unseen forces or experiencing the distinct sense of being watched as they pass through the old central shaft. Perhaps these apparitions are still driven by the same greed that brought them to Chollar Mine over 100 years ago.

Bottoms Up at the Washoe Club

With money to spend, the residents of Old Virginny Town needed someplace to blow off steam. The Washoe Club, appropriately nicknamed "The Millionaire's Club," was where the newly rich lived out their wildest fantasies. Men bellied up to the bar for heavy drinking and business talk as they imagined new ways to expand their growing empires. They played games of chance and caroused with prostitutes.

Like any good VIP hangout, the Millionaire's Club had 1 respectable main entrance and 2 secret rear exits for the patrons' discretion. Prostitutes could come and go through these secret doors and tipsy patrons could be removed quietly. But not all of the people coming and going were so feisty -- or, for that matter, alive. One room in the building was used as to hold dead bodies while gravediggers waited for the ground to thaw during cold winters.

Today this space is still home to a working bar said to be haunted by a trio of ghosts. An attractive blonde apparition known as the "Lady in Blue" is often spotted at the top of the spiral staircase. Some patrons have also spied the ghost of a scared little girl. The third ghost, an old-time prospector, causes a ruckus by snatching unattended drinks from the bar. Modern-day bartenders indulge his penchant for the drink by leaving a full shot of bourbon on the bar before closing down for the night. Come morning, the glass is always empty. Disappearing drinks, mysteriously locking doors and tipping barstools are just some of the bar's paranormal activities. It seems the whiskey-loving ghost also keeps his eye on the ladies -- witnesses have seen the front door swing open for some women as they enter the bar.

That Virginia City episode has since aired and you can now watch it in it's entirety. Click on this small picture and it will take you to the page. 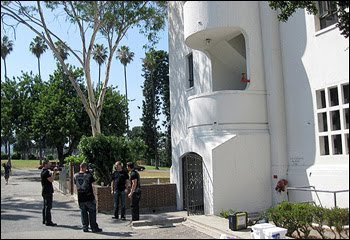 During its existence as an operating hospital in East Los Angeles, Linda Vista was deluged with dying gang members and the innocent bystanders that were inevitably brought down in the midst of a gangland war zone. 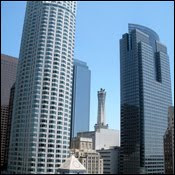 The Linda Vista Hospital was first established in 1904 as the Santa Fe Coastlines Hospital, a prospering healthcare facility dedicated to servicing employees of the Santa Fe Railroad. During the early decades of the 20th century, the hospital flourished as did Los Angeles' surrounding Boyle Heights neighborhood. In 1924, Santa Fe Coastlines was greatly expanded, allowing for a larger staff and increased patient intake.

In 1937, the newly enlarged hospital became the Linda Vista Community Hospital. However, like much of the country, the Great Depression and World War II soon derailed the hospital's good fortune and reputation. East LA was slowly transformed into a less affluent area, and the number of violent crimes escalated. Lowered funding at the hospital resulted in less staff to treat the influx of patients; as a consequence, the hospital's death toll rose.

By the 1970s and '80s, the gangs of East LA sent a steady stream of gunshot wounds and stabbings through Linda Vista's ER doors. The neighborhood was getting worse, as was the survival rate of patients admitted.

The increase in poor and uninsured patients took its toll on the hospital, and in 1988, Linda Vista stopped accepting ambulances in their ER. The quality of care continued to decline as doctors moved to more affluent hospitals, and the Linda Vista struggled to stay afloat.

In 1991 the last patient checked out of Linda Vista. While most believe the hospital closed due to lack of funds, there are stories circulating that the hospital's unusually high death rate was due to mistreatment and abuse.

Since closing its doors, the hospital deteriorated rapidly and it seemed Linda Vista was lost to the ghosts and spirits of those who died there. However, the building's proximity to Hollywood was its saving grace, and several movies and TV shows have used the hospital as a shoot location. Portions of "Outbreak," "End of Days," "Pearl Harbor" and the pilot episode of ER were shot inside Linda Vista Hospital.

During these productions, the hospital's haunted reputation grew. Reports of unexplained phenomena came from overnight security and production crews. Darting shadows, cries in the night and unexplained humming were all experienced by those working on the Linda Vista grounds. Many claim to have been touched and pushed by these unseen forces.

Three spirits in particular have been sighted on multiple occasions: a little girl lurks in the surgical room; a young woman paces the hallways of the third floor; and the spirit of an orderly still makes his daily rounds. 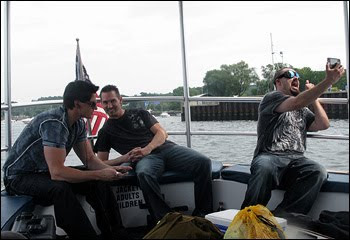 On a tiny, deserted island in the middle of Long Island Sound, lies Execution Rocks Lighthouse. Etched into a landscape of rocks and isolated by water, the lighthouse's history is full of dark stories of shipwrecks, torture and a serial killer. 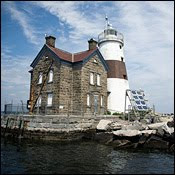 In the muddy waters of Long Island Sound off the coast of New Rochelle, NY, low tide reveals a group of menacing and jagged rocks. Known as Execution Rocks, condemned Revolutionary War prisoners and Colonials faced death in these unforgiving waters at the hands of British soldiers. Chained here at low tide, fated prisoners slowly drowned as the tide rose.

By the 19th century this brutal practice had ended, but the area was still a great danger to ships traveling the busy trade and commercial routes of the LI Sound. While some ships were destroyed and others suffered heavy damage, those who owned, stocked and crewed the vessels all agreed that protection from these harmful rocks was necessary.

Therefore, the solitary Execution Rocks Lighthouse was commissioned in1847 when the US Congress appropriated $25,000 for its construction; 20 years later the keeper's quarters were added and the first resident moved in. The beacon protected the island and surrounding waters almost without incident for the next 70 years. At which point, Execution Rock Lighthouse and its surrounding waters became hosts to unimaginable evil.

In August 1920, Carl Panzram was a thief in need of a house to rob. At 113 Whitney Ave. in New Haven, CT, he plundered the rooms, making off with pricey goods and some valuable bonds. It wasn't until after he left the residence and was en route to Manhattan that he noticed the name on the stolen bonds: William H. Taft, former President of the United States and now a professor at Yale University. He sold them for top dollar and continued his spree.

In New York, Panzram robbed yachts and boats all over the Long Island Sound before setting his sights on much darker crimes; he began killing in cold blood with the .45 Colt automatic stolen from William Taft's home. Panzram's pattern of killing involved tying rocks to each body, rowing them out to into the Long Island Sound and dumping them just 100 yards from the Execution Rock Lighthouse.

In his autobiography "Killer: A Journal of a Murder," Panzram writes, "In my lifetime I have murdered 21 human beings, I have committed thousands of burglaries, robberies, larcenies, arsons … For all these things I am not in the least bit sorry." Many of Panzram's victims were mercilessly tossed into the waters near Execution Rock Lighthouse.

In 1979, the lighthouse became fully automated. Grateful Coast Guard members happily abandoned shifts involving nightly watches at this lonely island and the waters that claimed so many. With countless souls meeting their end here, it's no wonder that strange sounds have been heard and ghostly images seen at Execution Rock Lighthouse. 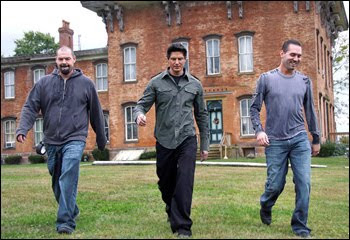 The mansion, owned by a wealthy abolitionist, was once a stop on the underground railroad. A gateway to freedom for hundreds of slaves, it was also the last stop for many who arrived in terrible physical condition and died there. The owner's family also suffered its share of death and heartbreak. 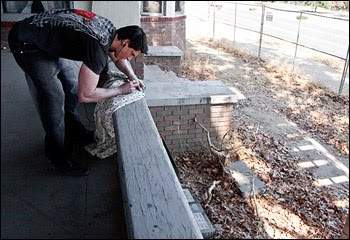 This once stately manor is often referred to as a black hole, because during its 7 decades of operation as a sanitarium and convalescent home, thousands perished, at times averaging 1 death per day. Some locals affix rosary beads and crucifixes to the fence surrounding the property to keep the evil spirits inside.

Posted by Atrueoriginall at 7:18 PM