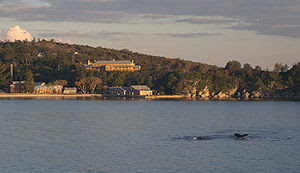 In 1828 the Quarantine Station was built because of all the diseases around the world. It was built on the harbor so that those sick passengers could go right to the station without entering into Sydney. Many of the patients died in agony from their diseases.

Robb, Dustin, Barry and Paul meet up with Caz Stokes, the site coordinator, who will give them the tour of all the haunted hotspots. Even though it was built in 1828, it didn’t open until 1833 and remained in operation until 1984. She tells them that when the people would arrive, they would walk up and a doctor would separate them into the healthy and sick. The sick would go to the hospital and the healthy would be separated between what class their ticket was for. They were looking for those with the plague, typhus, and smallpox. The Quarantine Station is known to be the most haunted place in all of Australia and Caz wants the GHI team to find out if this is true.

The first place Caz takes the boys is to the Shower Block. The sick were brought in to the showers first so they could try and disinfect them. The showers were equipped with water, disinfectant and acid which caused the top layer of skin to come off in about two days. The small peep holes were so the attendants can keep an eye on the patients while they were taking their shower. People have reported seeing apparitions especially near the back door. One seems like it was weeping and another looked to be a station attendant. These apparitions seem to interact with whoever is in the room at the time. The next place Caz takes them is to the hospital where Caz herself heard snoring coming from one of the beds and saw an imprint of a person on the sheets of another bed. The imprint looked like a full body of a person lying on the bed. The next place they walked over to was the hospital kitchen where a tour guide felt a rush of cold air move towards him. The spirit in that room seemed like an angry one. Next is the Morgue where all the dead had their organs removed and brought to the lab next door. A witness was in the morgue alone lying on the morgue slab and heard someone walking around the slab. It sounded like shuffling footsteps which stopped at her head and then she felt someone touch her hair. Robb ask Paul to be the one to lay on the slab tonight and he agreed. The next place they went to was the 3rd class dining room. The building that the dining room was in was built on top of the cemetery and used for burial ceremonies. One of the tour guides fells that this dining room was the most haunted place on the site. You have the feeling like you are being watched, someone is around and hearing footsteps walking all around the room is a typical occurrence. Another witness has seen a small boy crouching down in the corner of the dining room crying. Whenever he tried to approach the boy to see if he was alright, the boy would disappear. They next head down to the kitchen where Caz asked for one of the GHI team to sit in a corner where she felt a cold hand grab her ankle and tug on it. While some witnesses were standing by the dumbwaiter, a teenage girl wearing a pink dress would appear behind them and put her hands around their neck. One of the witnesses was struggling to get away and ended up with finger marks and bruising on her neck. The tour comes to an end and now it is time to investigate.

INVESTIGATION: The investigating starts with Robb and Joe in the Shower Block. Robb tells Joe the story of the Shower Block and then they start their EVP session. Joe is looking down the hallway and sees something moving. Robb heads down the hallway to check it out, while Joe heads off into another area. Joe asked Robb if he was moving his arms from side to side but it wasn’t him. While walking around, they hear a door rattle. It was the back door and Joe checked it out. Right afterwards, Robb hears whispering and Joe hears someone say, “Hey” in one of the shower stalls. Joe walks around and feels a tug on his jacket. They decide to end the EVP session and hope that they caught something with all the activity they experienced.

Dustin and Barry start off in the hospital with an EVP session. Barry uses the 360 microphone, which picks up more sounds than a regular recorder. Barry sits on one of the beds while Dustin asks the questions. Barry picks up something on the 360 mic and looks forward to reviewing the footage.

Brandy and Ashley begin in the 3rd Class dining room looking for the little boy ghost named Isaac that has been seen by some. After asking some questions, Brandy hears something behind her which sounded like footsteps. They walk around and head towards the stairs. They hear a noise downstairs in the kitchen and head down. Ashley sits in the area the Caz felt the cold hand touch her while Brandy stands in the room with the full spectrum camera. Brandy starts to feel cold on one of her hands and moves towards the dumbwaiter. They hear noises in the dumbwaiter so they put the camera on a tripod and lowered it inside. They are hoping that it picks up something down there.

Robb and Paul are now in the 3rd Class dining room looking for the little boy. In the back of the room they hear noises and footsteps moving towards them from across the room. Robb moved towards the noises to see if he would get a response, but he didn’t.

Paul is in the morgue alone and lying on the slab. He tells the spirits that they can touch him to make themselves known. Suddenly he gets up and asked if someone was in there with him. He heard footsteps walking around so he heads off to the lab to see if someone was there but found no one. He feels the temperature drop very fast in the area where he was standing. It continued to drop making him shiver.

Back at the shower block, we find Joe, Ashley and Brandy who are trying to get the guard ghost to come out and show himself. They walk around asking questions but didn’t get any action. This was the end of the investigation.

RESULTS: On their video with Robb and Joe, the rattling of the door was picked up in the showers. Also, “hey” was picked up as well. Paul and Barry also picked up a female voice saying “Paul” in the shower area. In the employee kitchen area Dustin and Barry picked up a male voice that sounded like it said, “three months”. Back in the shower block with Robb and Joe, after Robb asked if they could communicate, tell us what your name is, and they captured a voice saying, “let’s talk”. One of the pictures that Barry and Dustin took outside of the hospital had an apparition of a little boy standing near the fence. Now that was cool.

Robb has concluded that the Quarantine Station is definitely haunted.

Posted by Julie Ferguson at 9:38 AM

I'm thrilled you did the recap. I'll know now to watch it when they reshow it. I ended up watching Monsterquest because I'm a bigfoot freak. I flipped during commercials and heard some cool stuff, but I missed the boy at the fence. Awesome!